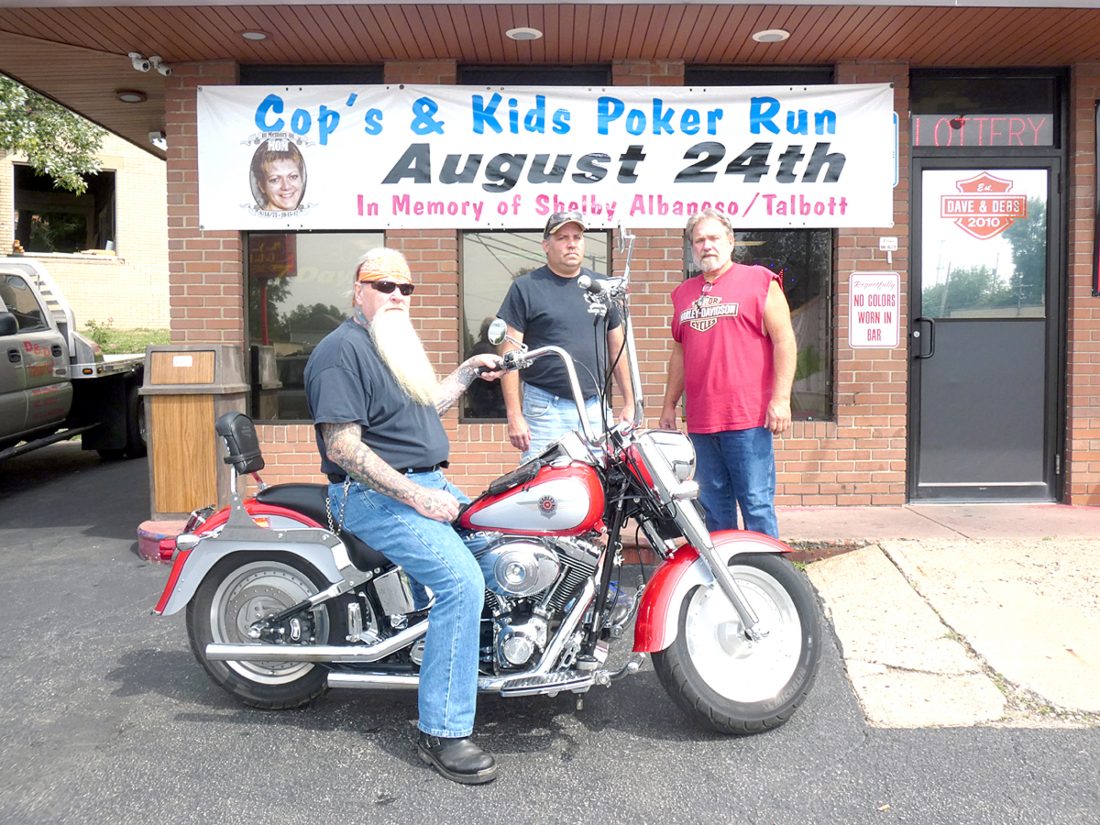 Frank Bekkering sits on his motorcycle as Troy McFarlare and David Albaneso look on outside Dave and Deb’s Place in East Liverpool. (Photo by Stephanie Ujhelyi)

EAST LIVERPOOL — For David Albaneso, August can be a tough month as he remembers his daughter Shelby, but for the past six years, he has coped with her death by pouring himself into organizing the annual Cops and Kids Poker Run in her honor.

This is the seventh year that motorcycle riders from everywhere will converge on Dave and Deb’s Place to help raise money for the Fraternal Order of Police 29 to assist buying winter coats and boots for needy children in the East Liverpool community. The event is Saturday.

Albaneso admits that his daughter Shelby Albaneso-Talbott would have approved. “Her passion was kids,” he explained as he pointed out she worked as a day care attendant while attending Kent State University for nursing when she got ill and passed away in 2012. She was 39 years of age and had three children.

Since its initial kickoff, the event has grown from raising $2,500 that first year to nearly tripling in year six. Over the last six years, Albaneso and his supporters have raised nearly $26,000 for area children, including helping to fill their needs for winter coats and boots in the holiday season. He would like to raise $10,000 this year.

Moneys are raised through the various fundraisers, like shirt and coffee cup sales, a 50/50 and a basket drawing.

The poker run starts at Dave and Deb’s Place, where $20 per bike buys participation in the run plus a complimentary breakfast between 9 and 11 a.m. Stops at Mark’s Landing, Bing’s Stoney Inn, the Carrollton Eagles and Wellsville Eagles are slated for the day’s activities, which culminate back at Dave and Deb’s with an afterparty with the U.S. 3 providing live music.

During their travels, the rider who collects the best poker hand receives a special prize.

“The business sponsors make this event possible,” Albaneso is quick to note of the event, which tends to average around 80 bikes – most with two riders. Unlike some poker runs, this one doesn’t charge additionally for the passenger.

As part of this event, attendees can also buy tickets to win a $300 barbecue grill with a $200 value meat package as well as enjoy some pretty tasty morsels, which include deep fried chicken; meatball, sausage and pulled pork sandwiches; and a variety of picnic favorites as part of the big spread that will be made available.

Bikes leave at 11:30 a.m. for the event, and registration is available Saturday morning at Dave and Deb’s Place, 1814 Lisbon Street in East Liverpool. One hundred percent of the proceeds go to the FOP 29’s efforts.

While Albaneso acknowledges that Dave and Deb’s Place does several poker runs each year, this one in memory of his only child is near and dear to his heart. “I would love to see us best $6,500,” he explained.

And, he seems committed to aspiring to that until accomplished. “I hope to have this run another 20 years and still be able to ride in it at age 78,” Albaneso concluded.