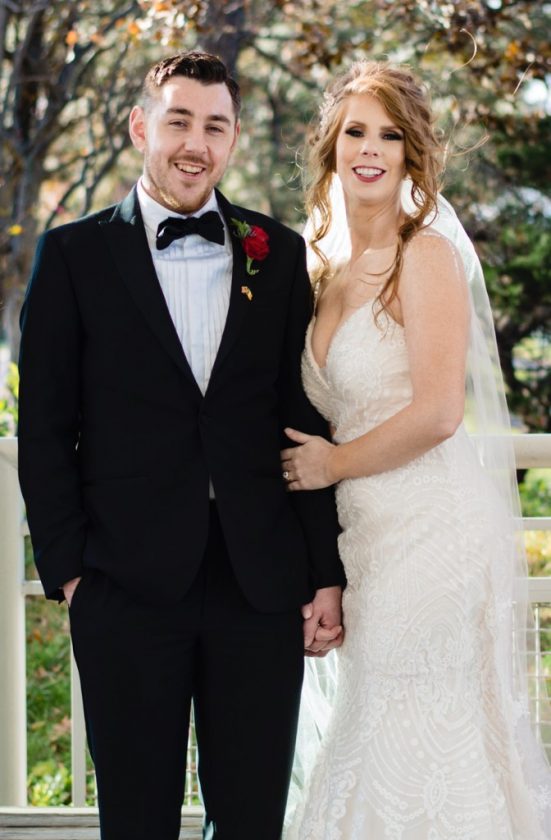 BOSTON – Laran Lee Hyder and Sean Anthony McGarr were united in marriage Saturday, Nov. 3, 2018 at St. Ann’s Parish in Boston, Mass., officiated by Father Brian Clary. Ceremony readings were performed by Eric Adkins, cousin of the bride, Andrea Adkins and Cathy Seckman, aunts of the bride, and Jennifer McGarr, sister of the groom. The bride and groom’s nieces, nephews, and cousins presented the communion gifts. Before hosting a plated-dinner reception for 130 people in the ballroom at the Neighborhood Club, the bride and groom exited the church with family and friends waving miniature American and Irish flags.

Given in marriage by her family, and escorted by her cousin, Tim Adkins, the bride wore a backless mermaid-style dress with patterned embroidery, a sweetheart neckline, and a scalloped hem cathedral-length train. Her cathedral-length veil was edged in scalloped lace. She carried a lush bouquet of deep red and plum garden roses, dahlias, and hanging amaranthus accented with blue thistles and pale pink roses in memory of her late grandfather, Andy Hester. Attached to her bouquet was the St. Clair Township police badge of her late father.

The groom is a 2005 graduate of St. Augustine’s Good Counsel College and the Dublin Institute of Technology. An electrical contractor, he is the owner of MCG Contracting Inc.

Following an extended honeymoon to Southeast Asia, the couple resides in Boston.