Saudi restaurants no longer need to segregate women and men 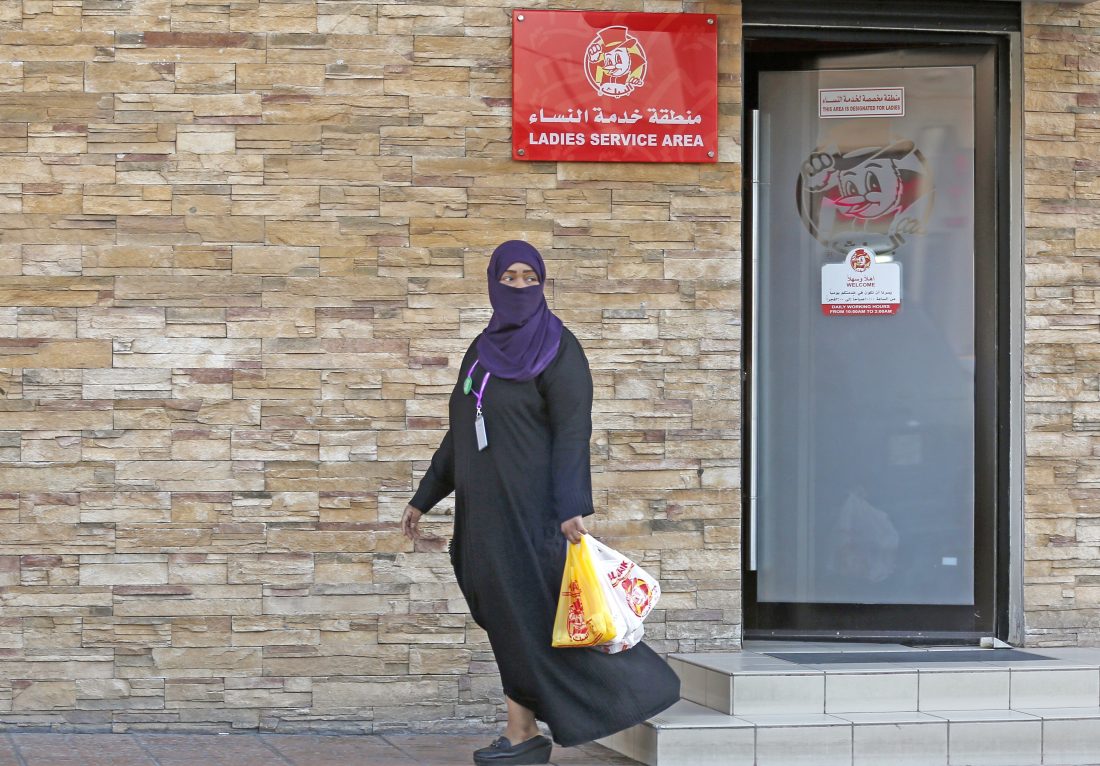 A woman leaves a ladies only service area at a restaurant in Jiddah, Saudi Arabia, Sunday. Women in Saudi Arabia will no longer need to use separate entrances from single men or sit behind partitions at restaurants and cafes in the latest measure announced Sunday by the government that upends a major hallmark of the conservative restrictions that had been in place for decades. (AP Photo)

RIYADH, Saudi Arabia (AP) — Women in Saudi Arabia will no longer need to use separate entrances from men or sit behind partitions at restaurants in the latest measure announced by the government that upends a major hallmark of conservative restrictions that had been in place for decades.

The decision, which essentially ends gender segregation rules in public, was quietly announced Sunday in a lengthy and technically worded statement by the Municipal and Rural Affairs Ministry.

While some restaurants and cafes in the coastal city of Jiddah and Riyadh’s upscale hotels had already been allowing unrelated men and women to sit freely, the move codifies what has been a sensitive issue in the past among traditional Saudis who view gender segregation as a religious requirement. Despite that, neighboring Muslim countries do not have similar rules.

Across Saudi Arabia, the norm has been that unrelated men and women are not permitted to mix in public. Government-run schools and most public universities remain segregated, as are most Saudi weddings.

Restaurants and cafes in Saudi Arabia, including major Western chains like Starbucks, are currently segregated by “family” sections allocated for women who are out on their own or who are accompanied by male relatives, and “singles” sections for just men. Many also have separate entrances for women and partitions or rooms for families where women are not visible to single men. In smaller restaurants or cafes with no space for segregation, women are not allowed in.

In recent years, however, Saudi Crown Prince Mohammed bin Salman has pushed for sweeping social reforms, with women and men now able to attend concerts and movie theaters that were once banned. He also curtailed the powers of the country’s religious police, who had been enforcers of conservative social norms, like gender segregation in public.

Two years ago, women for the first time were allowed to attend sports events in stadiums in the so-called “family” sections. Young girls in recent years have also been allowed access to physical education and sports in school, a right that only boys had been afforded.

In August, the kingdom lifted a controversial ban on travel by allowing all citizens — women and men alike — to apply for a passport and travel freely, ending a long-standing guardianship policy that had controlled women’s freedom of movement.

Reflecting the sensitive nature of this most recent move, the decision to end enforcement of segregation in restaurants was announced in a statement published by the state-run Saudi Press Agency. The statement listed a number of newly approved technical requirements for buildings, schools, stores and sports centers.

The statement noted that the long list of published decisions was aimed at attracting investments and creating greater business opportunities.

Among the regulations announced was “removing a requirement by restaurants to have an entrance for single men and (another) for families.”

Couched between a new regulation about the length of a building’s facade and allowing kitchens on upper floors to operate was another critical announcement stating that restaurants no longer need to “specify private spaces”— or in other words, partitions would no longer be required.

The new rules remove restrictions that had been in place, but do not state that restaurants or cafes have to end segregated entrances or seated areas. Many families in conservative swaths of the country, where women cover their hair and face in public, may prefer eating only at restaurants with segregated spaces.