STEUBENVILLE — The question was to foul or not to foul.

The Oak Glen boys basketball team led Steubenville by three points with 17 seconds left, and the Golden Bears’ head coach chose not to foul, instead relying on his team to play good defense. Big Red managed to get off a contested 3 from the corner in the waning seconds of the game, but the shot was off the mark. Oak Glen corralled the rebound and escaped the Crimson Center with a 64-61 victory in an OVAC consolation game Wednesday night.

“It was a heck of a game,” Everly said. “We struggled a little bit early. We have had some big games. Maybe we just came out a little flat. Their quickness got to us early. They were playing physical with us, and we stepped up. I am proud of the kids stepping up in the second half. It was a good game. It is a big win.”

“We ended up tying it at 58, and then they made a layup to retake the lead,” Big Red head coach Mike Haney said. “They made the layup because we did not get back on defense. Our transition defense was not there. They made that layup, and they went up by two. After that, we had to foul. They were 8 of 9 from the free-throw line in the fourth quarter.”

A 3-point play by Cade Kernahan pulled Big Red to within 52-51 in the fourth, but the Golden Bears countered with a 6-0 spurt to build a seven-point advantage. Big Red responded with a 7-0 run on another 3-point play by Kernahan and four points from Chase Zimmerman.

After Zimmerman scored to tie the score, Oak Glen’s Jontae Howard delivered a layup to give the Golden Bears a 60-58 lead with 57.3 seconds remaining. After getting a defensive stop, Gage Patterson was fouled, and he calmly sank a pair of free throws, increasing Oak Glen’s lead to 62-58 with 37.1 seconds left.

A 3-pointer by Trillyun Jones pulled Big Red to within 62-61 with 18.8 seconds remaining, and Patterson sank two more free throws with 17 seconds left to put his team back up by three points.

Oak Glen defeated Brooke, 60-57, on Jan. 14 inside the Brooke Wellness Center when the Bruins had a game-tying 3-pointer rim out at the buzzer. Following the game, Everly said he would foul the next time he was in that situation. However, he once again decided not to foul in the closing seconds against Big Red.

“I am a big Tar Heel fan, and I have watched Roy Williams foul and lose,” Everly said. “The worst-case scenario was he would go into overtime. They started with 17 seconds, and when they started they were down to six seconds.

“Jontae Howard made a heck of a tip. He got a piece of the ball on the shot. That was a big-time play.”

Haney said his team got what it wanted on its last possession, but the shot just didn’t go down.

“We had a look at a 3 from the corner,” he said. “We just missed the shot. There wasn’t enough time after that. Oak Glen got the rebound and time expired. We had to take a 3 because we were down by three. I wish we didn’t have to take a 3. We did not value the basketball. We also had three lane violations on made free throws.”

“We’d rather have the better second half,” Haney said. “We had a five-point lead at halftime. We got off to a slow start in the second half. We only scored 10 points in the third quarter. We didn’t score for like four minutes. We were up 29-24, and then we ended up being down.”

The Golden Bears outscored Big Red, 19-10, in the third to rally and take a 43-39 lead into the fourth. The victors ended the quarter on a 7-0 spurt to take the lead.

A strong first quarter enabled Big Red to take a 16-11 lead into the second. Both teams scored 13 points in the second, as Big Red took a five-point advantage into the locker room at halftime.

“We have played a lot of close games, and the games are starting to go our way,” Everly said. “We beat East Liverpool at the buzzer with a 3. Saturday, we beat East Fairmont, 62-61. Things go back and forth. We have played games like this one after another. The only team to blow us out is St. Clairsville, and we see them again on Friday.”

Steubenville: Travels to Edison Tuesday in a regular-season game. The JV game is scheduled to start at 5:30 p.m. 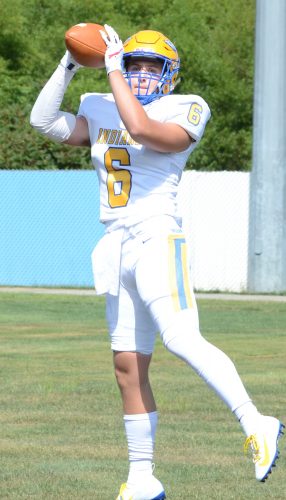