Potters get a boost off the bench 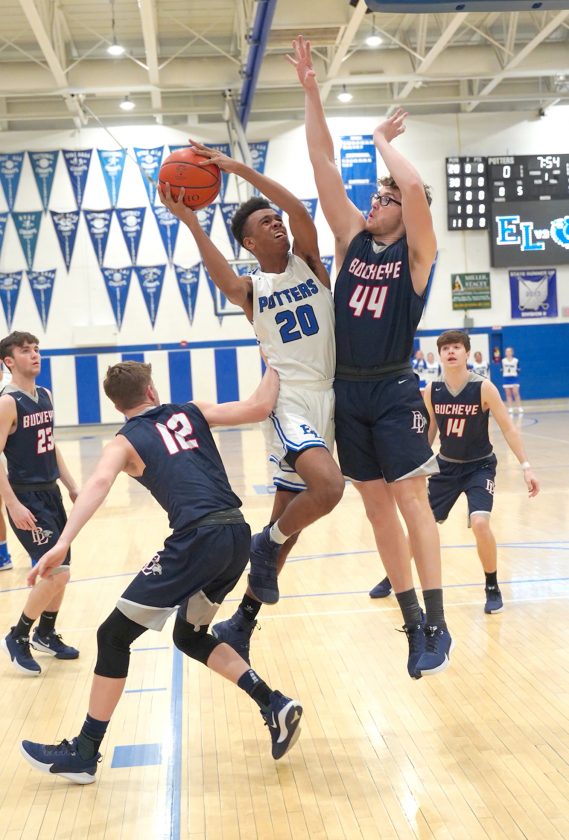 “I always talk to him about making an impact when he comes off the bench, we needed him to be more aggressive,” Conley said.

The Potters’ bench sparkplug showed exactly what type of instant impact he can have Tuesday, keying a decisive first-half run as East Liverpool roared back from a sluggish start to breeze past Buckeye Local 84-52 at Potter Fieldhouse.

Woodyard finished with 14 points and four rebounds. Ten of his points came during a 19-4 burst that spanned the first and second quarters and gave the Potters firm control of the game.

“Over the last couple of weeks, Nick has been playing great basketball, he’s been really active,” Conley said. “Tonight, he gave us an instant impact. That’s exactly what we’ve wanted him to do.”

The game was tied at 16 late in the first quarter when the Potters began to pull away. They led 25-18 when Woodyard scored on four straight possessions to widen the gap to 33-20 with four minutes left before halftime. The Panthers never got within single digits again.

“We were able to get some turnovers and open up some holes in the defense,” Woodyard said. “I couldn’t ask for better teammates to get me the ball and put me in good positions to score.”

East Liverpool forced 28 turnovers and was able to feast in transition most of the night.

“We started trapping more late in the first quarter and made them speed things up,” Woodyard said. “We rotated really well and did a good job making them uncomfortable.”

Woodyard led a second unit that outscored Buckeye Local’s bench 29-6 and helped flip the momentum after the Panthers jumped to a 12-6 lead in the first three minutes.

“I thought Buckeye Local improved a lot since we played them last month,” Conley said. “They gave us fits early on. We were in a little bit of trouble for a bit, but our bench led by Nate, Levi George and Gannon Irvine gave us a big spark and then we settled down.”

Tresean Jackson removed any doubt with 10 points in the first four minutes after halftime. The East Liverpool senior finished with a game-high 28 points and four assists. Brennan O’Hara had a solid night with 14 points, four rebounds and four assists.

Buckeye Local was led by Jake Mayle with 21 points.

“We really stressed getting back in transition and unfortunately we couldn’t do that tonight,” Buckeye Local coach Chris Heaton said. “It all starts on the defensive end for us. If we can’t stop anybody, it’s going to be a long night.”

¯The Potters have won their six Buckeye 8 North games by an average of 31 points.

¯East Liverpool senior Izaiha Browning will not be rejoining the team this season for undisclosed reasons according to Conley.

ST. CLAIRSVILLE — History was made Saturday at St. Clair Lanes as 17 boys teams and 13 girls squads competed in ...

NEW MANCHESTER, W.Va. — What a difference a half can make in a basketball game. Home-standing Oak Glen never ...

Ferry turns the tables on Beavers

From Staff Reports CONNORVILLE—Just five days after falling at Beaver Local, Martins Ferry shot out to an 18-8 ...