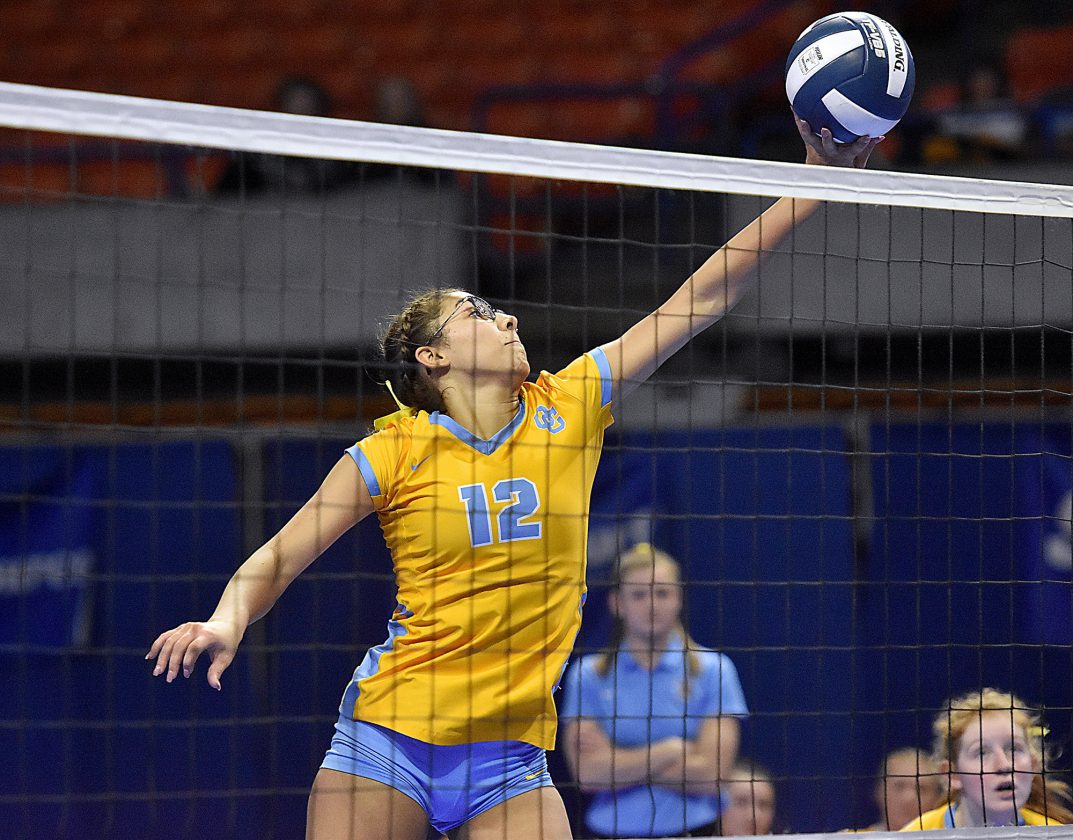 After leading the Golden Bears to an OVAC 4A title, a W.Va. Class AA championship and a perfect 38-0 season, she was named first team all-state for her dominating campaign.

“Skye is an all-around great volleyball player offensively and defensively,” Oak Glen coach Morgan Poling said. “However, her defense and game IQ are her strongest skill sets. She sees the court extremely well for being a high school level athlete.

“During rallies, Skye is everywhere on the court. She moves so well defensively and makes big plays when they need to be made.”

Stokes was introduced to a new environment at the start of 2019 after moving from East Liverpool to Oak Glen but she made the adjustment period look easy.

“This was an amazing season,” Stokes said. “It was such a different atmosphere. Our coaching was amazing and the girls were great.

“I played with three of the girls when I was younger in McKayla Goodlin, Hannah Rogers and Jaedyn Hissam, so that made it easier, too.”

Not only was it Stokes’ first season with the Golden Bears but it was Poling’s first time as head coach. She credits Stokes for making her job easier and more enjoyable.

“So fun,” Poling said of what it’s like having Stokes on the team. “Skye is an extremely talented volleyball player, that’s no secret, but she’s one of the most down to earth people I’ve ever met.

“Skye not only brought her talent to our team, but her leadership as well. She leads by example and is a vocal leader, too. She always showed up to work hard and never took a rep off. Every rep matters to Skye and that is why she is the player that she is. She works extremely hard.”

Coming into a new situation and — as the season went on — dealing with the pressure of an unbeaten record could be tricky hurdles to manage but Stokes and the Golden Bears made it work to perfection — literally.

“I was a little nervous with those high expectations,” Stokes said. “But I was pretty confident thanks to our coaching and we did a lot of team-bonding. We were always together as a team and that helped a lot.”

That confidence shined the most on the biggest stage.

As Oak Glen rolled through to the state championship, it found itself in unfamiliar territory — trailing.

After dropping the first two sets, the top-seeded Bears were deadlocked at 23-23 with No. 2 Shady Spring and the Tigers just two points from a state title of their own.

That’s when Poling called a crucial timeout that gave Stokes and her team all the motivation they needed.

“The state championship was nerve-wracking,” Stokes said. “We were down 2-0 and couldn’t lose the set. The first two games we were really nervous and it was showing.

“Coach (Poling) called timeout and said ‘play for the seniors.’ When she said that, everything switched. We all played really hard and the state title turned out to be the highlight of the season. That week was so fun and we had so much support.”

With this unforgettable season behind her, it is time for Stokes to look toward the future where she will continue her volleyball career at her dream school — West Virginia University.

“It was an easy decision for me,” the WVU commit said. “I’ve always loved that school, I love the campus and I love the coaching staff.”

The race for second place in the Player of the Year voting was extremely tight with senior Alex Darby of Spring Valley earning runner-up accolades.

Darby was the Mountain State Athletic Conference Player of the Year and a three-time Class AAA first team all-stater.

ST. CLAIRSVILLE — History was made Saturday at St. Clair Lanes as 17 boys teams and 13 girls squads competed in ...

NEW MANCHESTER, W.Va. — What a difference a half can make in a basketball game. Home-standing Oak Glen never ...

Ferry turns the tables on Beavers

From Staff Reports CONNORVILLE—Just five days after falling at Beaver Local, Martins Ferry shot out to an 18-8 ...

Hall selected as Dec. Leo of the Month