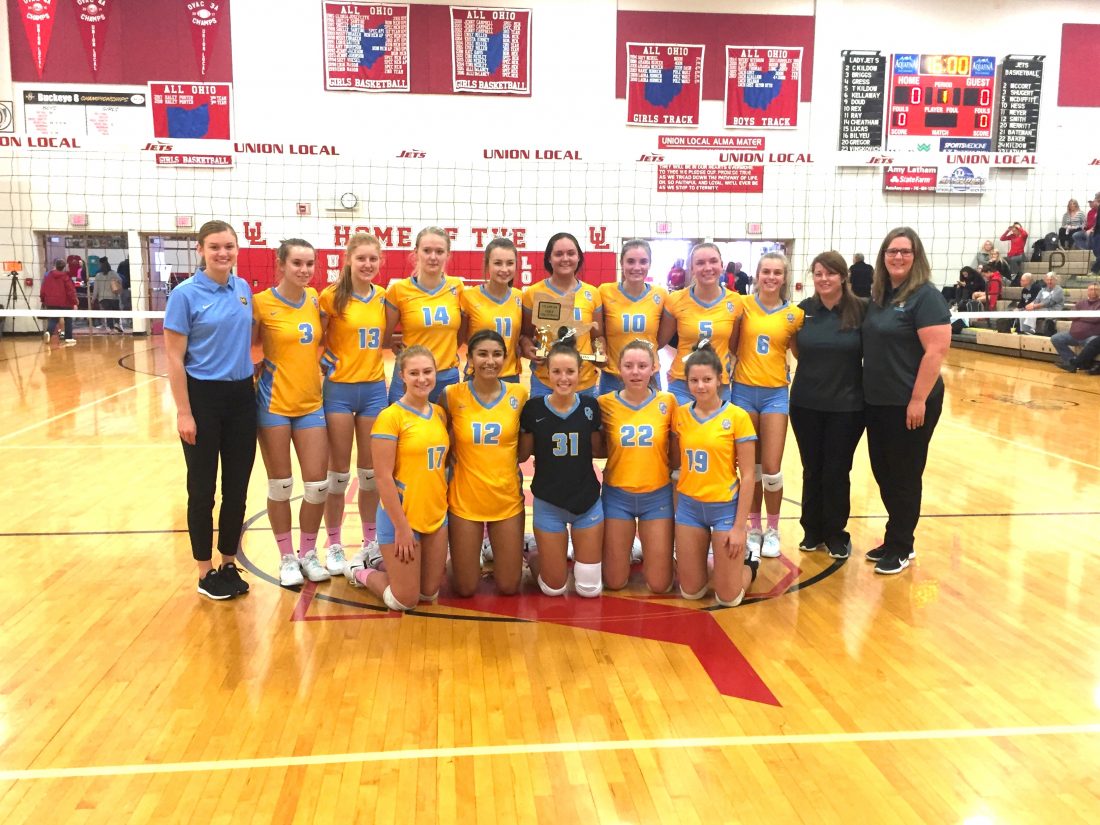 MORRISTOWN — It certainly has been quite the fall in sports at Oak Glen. While the football team is putting it name in the history books, sitting at a record of 7-0, another team is also yet to find a blemish on its record.

The Golden Bears’ volleyball team went into Saturday’s OVAC Class 4A title game match up against East Liverpool with a 25-0 record on the line. It didn’t take long for Oak Glen to capture Win No. 26 as it downed the Potters 25-21, 25-12, 25-16 to secure an OVAC 4A title Saturday morning at Union Local High School.

It was also a rematch of last year’s title game where East Liverpool took home the hardware.

“I thought it was a great matchup,” Oak Glen (26-0) coach Morgan Poling said. “East Liverpool is a great team, so hats off to them. There was a lot of good energy on both sides. It was a fun match.”

Poling is in her first year as coach of Oak Glen and is enjoying the ride.

“They’re a great group of girls and they’re really fun to work with. That’s what it’s all about,” she said.

The Golden Bears faced a small deficit in the early going of the first set. Down 6-4, Oak Glen rattled off eight unanswered points to take a commanding lead. However, East Liverpool did not go away. Down 19-14, the Potters tied the match after scored five straight. The Golden Bears, though scored six of the final eight points to capture the first set.

The second set was when Oak Glen took command. With the scored tied at 4-4, the Golden Bears raced out to a 22-10 lead after an ace. After the Potters scored two straight. the Golden Bears ended the set with three consecutive points to go up, 2-0.

“Every day show up and they work hard,” Poling said about her team clicking. “They work for each other and they are best friends on and off the court. I think that plays a major role in that.”

“It’s an amazing feeling for them,” Poling said about the championship. “Especially for our five seniors.”

The Golden Bears wasted little time in the third set as they scored the first four points and 10 out of the first 13. The lead blossomed to nine on multiple occasions and the Potters never found a way to get back in the match.

“I don’t think we came ready to play,” East Liverpool coach Kelly Kiger. “We just made too many unforced errors which is a shame.”

“We have to work harder in practice, have more effort and have better vision,” Kiger said. “We can’t have two players working hard and the other four not. You don’t win a game with two players, you win a game with six. We didn’t do that (Saturday).”

East Liverpool (13-9) hosts the winner of Carrollton and Steubenville on Wednesday in Div. II sectional play.

1918 pandemic is a murky guide for sports fans

The image is striking: Fans watching a college football game in the midst of a pandemic, wearing masks with a ...

EAST LIVERPOOL— While the Thompson Park Dolphins youth swim team will not have a typical season, the team will ...

NEW YORK — The NHL cleared the way Thursday for players to return to practice rinks next week and firmed up its ...

NHRA not in Ohio this year

NORWALK — The National Hot Rod Association will resume its 2020 season without Summit Motorsports Park on the ...