Beavers duel with the best 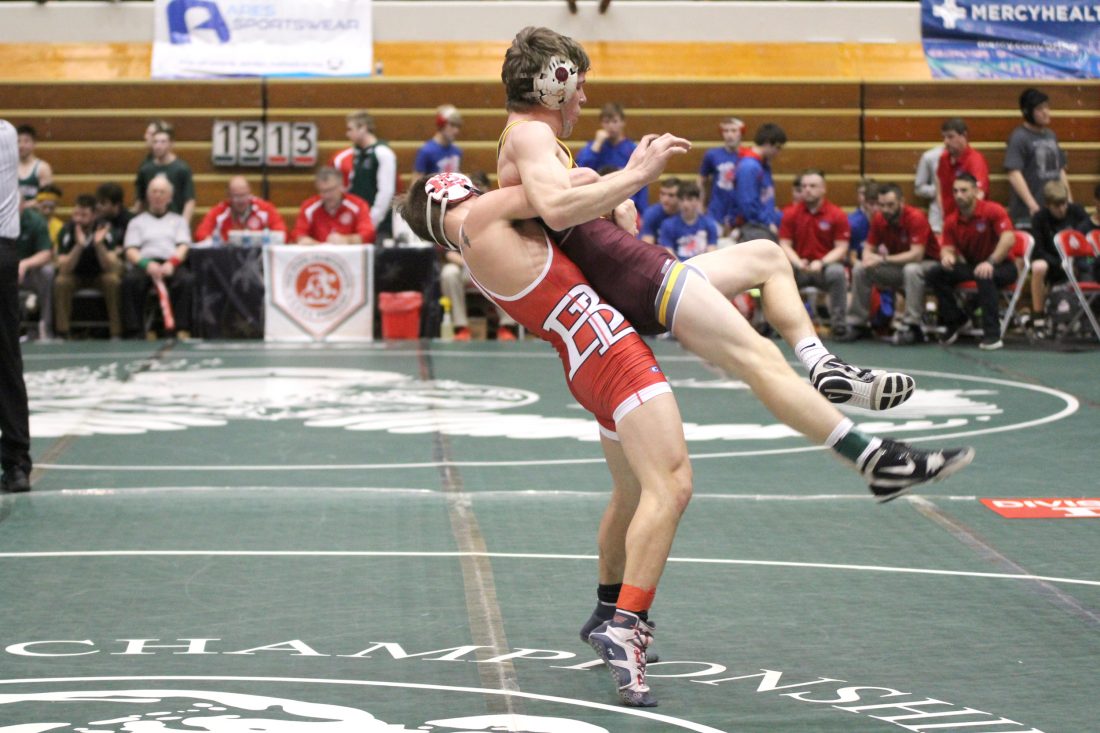 The win vaulted Beaver Local, ranked third in the state, against second-seeded Aurora which eliminated the Beavers 34-25 in a state semifinal. Later, Aurora lost the state title match to No. 1 seed St. Paris Graham, 38-24.

The experience of advancing to the State Duals was a win-win all around for Beaver Local, especially considering eight wrestlers in the Beavers’ lineup are underclassmen.

This is something we want to experience year after year. It is a great opportunity to get down here and compete against the best.”

“It feels amazing (to have competed at the State Duals) because we worked really hard and it feels amazing to be here,” said Beaver Local’s 138-pound Jared Wright, one of the senior leaders on the team.

Aurora head coach Johnny Papesh, a former standout wrestler with the Greenmen, had nothing but praise and respect for Beaver Local’s effect against his team.

The Beavers opened the day with a 47-21 rout of Hamilton Ross which was making a second straight trip to Columbus.

How dominant was Beaver Local in its opening win over Ross?

The Beavers rolled out to a 47-0 lead while winning their first nine individual bouts.

“It’s awesome, this atmosphere was amazing,” said Beaver Local’s Beau Smith who recently become the school’s all-time leader in wins. “We have such a great following, our fans are awesome. They’re the best.”

Wright was asked about the strength of his game.

“I just try to out-power people every time I wrestle,” he said. “I always have a good motor and nobody can usually keep up with me and that’s what I always go back to.”

This year’s Beaver Local team blazed a new trail by qualifying to state and Williams feels the best is yet to come.

“This (the state duals) is something we circle on the schedule and we work hard for,” he said. “It’s something we want to continue to do, that’s for sure.”

In the semifinal loss to Aurora, the Greenmen were successful in holding serve against the Beavers’ outstanding lower weights and then won the majority of the middle weights and locked up the win after the 195-pound match. The Greenmen then forfeited the final two weight classes to the Beavers.

Winning by a pin for the Beavers against Aurora was 120-pound freshman standout Logan Ours, the No. 3-ranked D2 wrestler in Ohio, who pinned Bo DiJulius in 3:30, while winning by a decision for the Beavers was 126-pound senior star Cole McComas, who whipped Aurora’s Brian Kennedy 15-3. That win temporarily gave the Beavers a 10-7 team lead over the Greenmen.

But Aurora tied the match at 10-10 after with a win by decision at 132 and never trailed again.

Beaver Local’s other win by decision was garnered by freshmen Brenden Severs who rolled to a 10-3 win over Aurora’s Ethan Anderson. Winning by forfeits for the Beavers were Garrett Givens (220) and Daniel Wirth (285).

Williams was very proud of his team’s effort in both of their state matches.

“The credit goes to our kids, they work hard and they do the right things,” said Williams. “They prepare the right way and the credit goes to them. I know they have higher expectations than the way this ended but they should be proud of how far they made it and we look for brighter things in the future here.”

Williams made sure to praise the great following of Beaver Local fans that made the trip and showed so much support.

“We had a great group of fans come down and follow us and support us and that means everything to our kids.” he praised. “It says a lot about our wrestling family and what this sport means to our community.”

Hamilton Ross, Beaver Local’s first-round state opponent, was the only Div. II team that made a second straight appearance in the State Duals. St. Paris Graham also returned but competed in Division I last season, winning the title. The Falcons opted to go back to Div. II this season.

In Sunday morning’s other quarterfinals, Sandusky Perkins trailed by over 20 points but rallied to nip Indian Valley 35-33 and St. Paris Graham rolled London 62-8.

WV Derby with no fans

CHESTER, W.Va. — The 51st running of the West Virginia Derby will go ahead this year, but without a crowd to ...

The Big Ten and Pac-12 became the first Power Five leagues to shift to an all-conference fall schedule as the ...

The Eastern Buckeye Conference has played with seven schools the last two seasons. Now the league is down to ...