A little over a year ago, a spotlight was shining brightly on our city from around the world. The secret of opioid addiction was no longer.

The city administration and police department decided to take a stand against heroin and opioids like no one ever had. Releasing the photo of that boy in the backseat, with grandma and her boyfriend overdosed in the front, lit a fire that many said would only do harm to our city. Some questioned such a drastic measure, others embraced it. The city administration went to work, bringing departments together, combining resources, networking with non-government agencies, and utilizing every tool available to fight this epidemic.

Since that time, many have visited our city — some offering help, some just to ask questions, and many to find out how we were going to fight our way out of the opioid epidemic.

A year ago, we had virtually no treatment options. Today, we have many. In fact, anyone who is serious about recovery is offered that chance, regardless of income or insurance status. Both faith-based and traditional recovery options are available for the first time in our city.

A year ago, our police department was receiving overdose calls at a rate of 1 to 2 per day and as many as 11 in one day. Today, we have received only 2 overdose calls in the last 30 days.

A year ago, drug dealers roamed city streets. Today, countless drug dealers have been arrested, and with the help of our court system, remain incarcerated.

The citizens of East Liverpool are now more vigilant than ever. Our community came together a year ago and took on this challenge head on. “See Something Say Something” resulted in record numbers of tips, which led to record numbers of arrests. Our Columbiana County Drug Task Force presence has doubled, and our cooperation with them has grown significantly. All city departments realized that we all have a role to play in making our city a better place to live and raise a family.

Out of all of this, we proved that when a community comes together you can accomplish anything.

I realize that this problem is far from over and that we must remain vigilant in our efforts. However, I felt it was time the world knew where we stand.

(Brian Allen is service safety director for the city of East Liverpool.)

At this time of year, thousands of Ohio students would normally be walking across stages in auditoriums, gyms and ...

Yesterday (May 6), Senate Bill 1 passed within the Ohio House of Representatives. As a member of the State and ...

As the coronavirus pandemic has gripped the world, it seems as though every aspect of life before this crisis has ...

Will electricity be affordable in our post COVID-19 nation?

The COVID-19 pandemic is clearly wreaking havoc with the U.S. economy. And Americans are already feeling the pain. ... 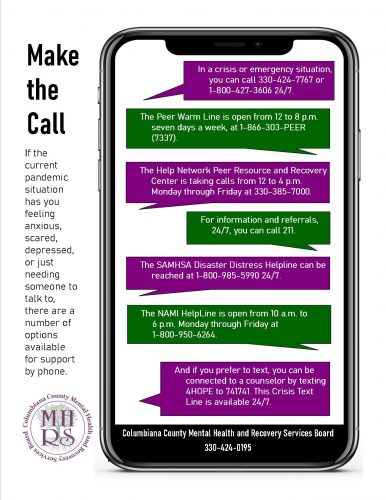 Preventing suicide during the COVID-19 pandemic

As your state representative I believe it is important that the people I serve know that I have been, and continue ...