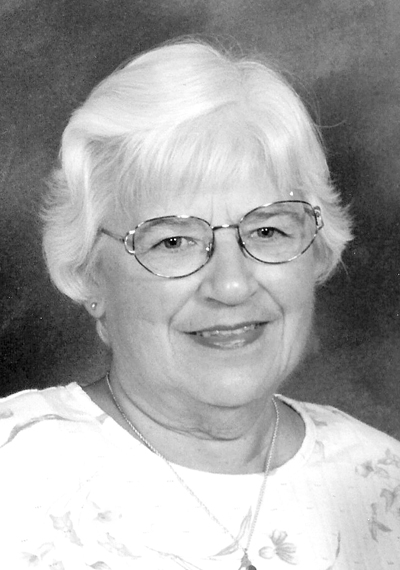 Born April 18, 1923 at Columbus, Ohio, she was a daughter of the late Adolph Paul and Charlotte Evans Trappe. She graduated from West High School in 1941 and went on to further her education and earn a music degree from Ohio State University in 1946. She then moved to this area after finishing her education. She was a music teacher in the East Liverpool School District from 1946 until her retirement in 1989.

A member of the 1st Evangelical Presbyterian Church in East Liverpool and their former choir director, she also belonged to the Columbiana County Teachers Association, directed three vocal choirs and began a bell choir at her church. She also directed the bell choir at the 1st United Methodist Church in East Liverpool and was the organist at the 1st United Presbyterian Church in Chester, W.Va. She was a member of the American Red Cross Board of Directors and was a Red Cross swimming instructor for 30 years.

Marwynne and her husband were members of several travel groups and after retirement, they traveled extensively for over 24 years. Their travels took them to most of the United States including Alaska and Hawaii, as well as Canada, Europe, South America, Australia, New Zealand, Fiji, and several Caribbean countries.

She was preceded in death by her husband, Darrell C. Serafy, whom she married July 15, 1951, on Aug. 16, 2014. Survivors include two daughters, Darolyn Sue McComas of East Liverpool and Deborah Lee Nicholson-Och of Lake Jackson, Texas; and one son, David Alan Serafy of Groton, Conn. There are five grandchildren, Michael McComas and his wife Charissa, Meghan Klenotic and her husband, Luke, Matthew McComas, Scott Nicholson and Shawn Nicholson. In addition, she leaves behind three great-grandchildren, Kierston McComas, Kayla McComas and Owen Klenotic.

Besides her husband and her parents, she was also preceded by two sisters, Marjean Elizabeth Distelhorst and Joyce Sharlene Shoup; one brother, Garth Evans Trappe; and two sons-in-law, Bill McComas and Bill Och.

In compliance with Ohio State regulations with concerns of the COVID-19 virus a private family service will be held at the Dawson Funeral Home on Tuesday at 1 p.m. with the Reverend Gregory Mead of the church officiating. We encourage you to reach out to the family electronically at: www.dawsonfuneralhome.com where condolences can be sent.

Burial will be in Riverview Cemetery.