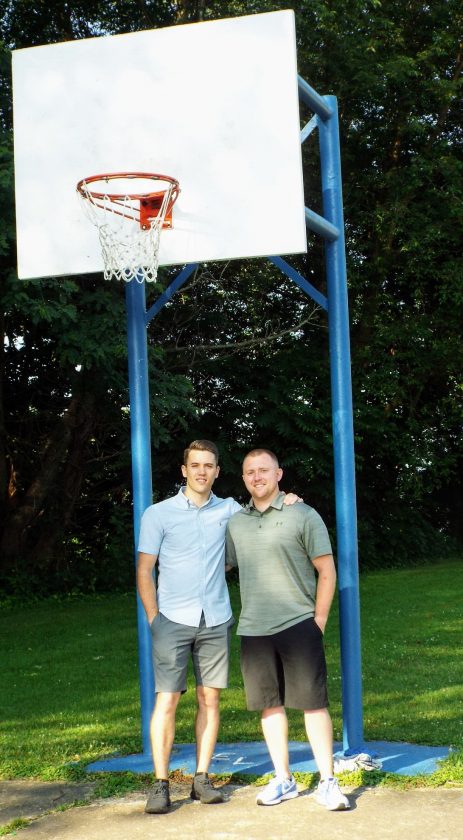 Joey Bickerton and Kade Reynolds stand on the basketball court in the Klondyke neighborhood, which needs some T. L.C. With community support, they hope to raise enough funds to freshen up both this court and one in Thompson Park. (Photo by Stephanie Ujhelyi)

EAST LIVERPOOL — Two men from the old neighborhood saw the summer months as the perfect time to tackle a long envisioned community project.

Kade Reynolds and Joey Bickerton are most of the way to a fundraising goal to redo basketball courts in Reynolds’ old Klondyke neighborhood and Thompson Park.

Reynolds was involved the last time that the Klondyke court had a facelift a decade ago.

In the past week since posting their GoFundMe campaign, the dynamic duo has raised $2,695 of their $3,500 goal from more than three dozen community-minded donors.

The goal is to install new backboards, hoops and nets as well as reseal the court, which reflects its age through its grass-occupied crack-riddled surface.

Plans also are to powerwash everything and also extend the fence, so errant balls don’t roll down a hill and get lost in a nearby wooded area near the riverside.

The men estimated each court would cost $1,500 and said plans to redo a court near Maryland Avenue was quashed due to the city having development plans for that area.

“We just wanted to make the city a little better- especially for kids,” Reynolds said.

Donations have been received from entities like the Team Mojo Foundation, where Reynolds and Bickerton were involved previously, and Heritage Thermal Services, but the majority has been contributed by past and present residents.

“So many people want to help, “ Bickerton said, adding donations recently were received as far away as Japan.

Helping city youth is what it is all about, they explain.

The old backboards will be refurbished and be taken to Fulmer Park.

They hope to have the Klondyke project done by the start of the school year; however, they added the pandemic causes a lot of uncertainty about the timetable.

To donate via GoFundMe at www.gofundme.com/f/project-basketball-court-makeover.