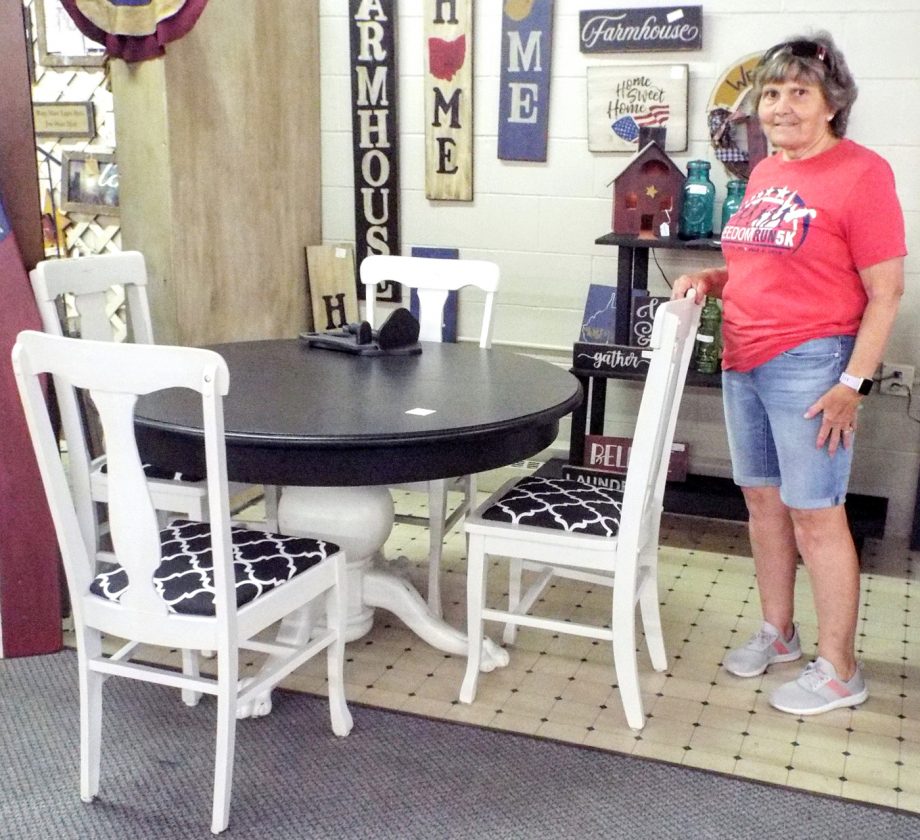 Irene Javens shows off this table that she has up for sale in booth 7 of Nana’s Primitives. She is currently one of 20 vendors who pay for space in the shop that just relocated across from the East Liverpool fire station on St. Clair Avenue. (Photo by Stephanie Ujhelyi)

EAST LIVERPOOL — Before the coronavirus pandemic of 2020, the Hissom sisters, owners of Nana’s Primitives, found themselves in a bit of a crafting complication.

Around six months after opening their store next to Tri-State Cab on Sixth Street, they found they filled the space.

“We had crafted ourselves out of that location,” Paula Hissom explained.

However, they recently relocated the shop into a much larger space in the former Roe Carpet building on St. Clair Avenue, after Mark Hissom, Paula and Amy’s uncle, bought the building and offered them the space at 621 St. Clair Ave.

“It is so much bigger and brighter,” Paula said as she looks around the building.

Nana’s Primitives had opened just in time for Small Business Saturday at its location.

With its early Americana decorating style featured front and center, it embraced a primitive folk style that typically includes a rough, simple or distressed look and the muted colors that were fancied by craftsmen using original plant dyes.

Generally it is a popular choice for history aficionados who often pay thousands from reproduction pieces, where places like Nana’s Primitives can provide an option for them to add to their home decor for much less.

In addition to adding to their vendor selection, which will include antiques and farmhouse, Nana’s also will adding a craft class area now that they have the space to do so. “I’m going to put in some black distressed tables in the rear of the building for the craft area, and we are adding a snack area,” Paula said.

Still under construction, Nanny’s as it will be called will have an area in back near the craft area, where shoppers can grab a sandwich, soup, ice cream, beverages or penny candy. Run by sister Amy and her friend Angela Allen, Paula hopes to see Nanny’s open by July 4.

Though Nana’s now has 20 vendors, Paula said they are still looking to add a few more. Interested parties can either contact the sisters through the store’s Facebook page or by phone 330-708-8179.

Nana’s Primitives is located across the street from the East Liverpool downtown fire stations and Darlene’s. Hours are 10 a.m. to 5 p.m. Mondays through Saturdays. Cash and credit cards are accepted.

EAST LIVERPOOL — Seven months ago, voters said no to speeding cameras within city limits, and the fruits of the ... 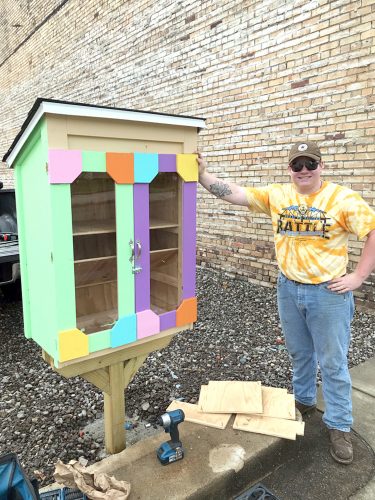 COLUMBUS — The daily number of confirmed and probable coronavirus cases reported to the Ohio Health Department ...

LISBON — A program has been extended to continue making temporary housing available for anyone who can no longer ...

No minors this year