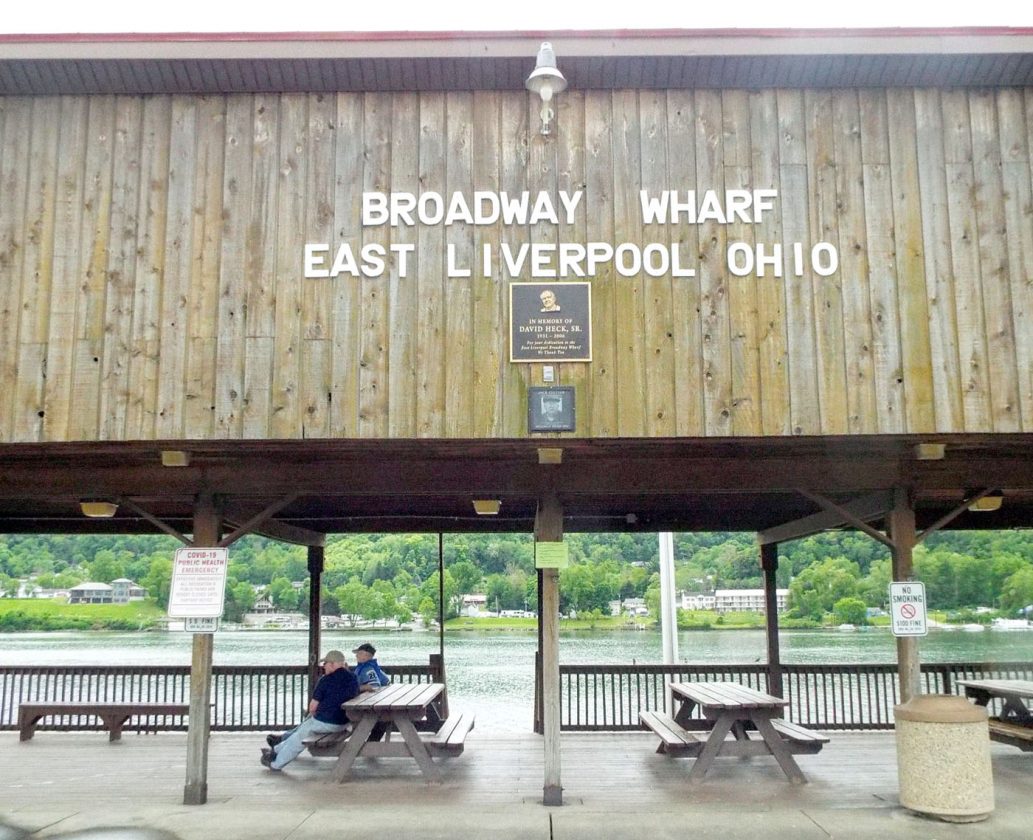 The Broadway Wharf in East Liverpool

Some area businessmen and community

representatives offered their input on the

region’s recovery attempts from the epidemic.

Lisbon Mayor Peter Wilson is hopeful the village will bounce back. He pointed out six new businesses had opened downtown in 2019, but since the governor’s shutdown orders two of the businesses — the ice cream parlor, N2, and Savvy Sisters boutique — announced that they would not reopen.

“Momentum has stalled but it hasn’t completely stopped,” Wilson said. “We had one new business — a florist — open right before Mother’s Day, and a restaurant — Dreamers’ Cafe — should be opening shortly. And C4 — a cafe — is almost ready to open as well. I am cautiously optimistic but there are so many unknowns, especially if we have a second wave of the virus.”

He said many of the village’s restaurants have survived by offering take-away service. With the governor lifting most restrictions, most are again open for business, including the iconic Mary’s Pizza, which was closed when co-owner Steve Garofalo was diagnosed with COVID-19. The popular pizzeria reopened for take-away service on April 28 and it has been busier than ever.

One uncertainty, however, is whether the Columbiana County Fair and the Johnny Appleseed Festival, are held this year. “Since both events are held in the village, their postponement would hurt Lisbon’s businesses,” said Wilson. “However, I think most people understand what’s at stake. Whatever happens, we will bounce back.”

While several businesses in East Palestine were considered essential and did not close at all, many others seem to be back open or planning dates to reopen. Brittain’s sales division, several hair salons, tattoo shops, flower and gifts retail stores have recently started opening their doors again.

East Palestine Area Chamber of Commerce Treasurer Bonnie Davis said she knows this has been hard on all of the businesses, but at this time she has not heard directly from any businesses seeking help from the chamber to reopen.

The East Palestine chamber board is available to support the business, although the board has not met during the COVID-19 pandemic.

However, the chamber did make the difficult decision to cancel the popular Annual East Palestine Street Fair, which is usually held around the Memorial Day weekend. Davis said they knew there were a lot of people who were disappointed because the event draws people to town, but it just was not the right time for it to happen this year.

Although the East Palestine Memorial Public Library is currently offering curbside pickup of library materials, there is not currently a date scheduled for it to reopen.

As businesses in the state and county begin to open back up, Columbiana Mayor Bryan Blakeman has seen a boost of optimism around the city, and he believes it will have a key role in the rebuilding process.

While Blakeman said he could see the unemployment getting even higher in the county in the short-term, he is hopeful that those numbers will go up, as businesses will need those employees in order to get back on track.

“In Columbiana, I think we are already seeing quite a bit of rebound,” Blakeman said. “What we know is that the future looks different. Even if everyone comes back to work, how they come back to work may be different with more remote ways of doing business. At the same time, it allows businesses to operate at a lower cost.”

Notable businesses around the city like Birdfish Brewing Co., Das Dutch Haus and Homestead Kitchen and Cocktails have all returned for business and are experiencing big turnouts, while enforcing social distancing.

City Manager Lance Willard noted the importance of big businesses like ABL Wholesale Distribution and R&L Carriers, which are bringing a lot of jobs into the community. Compco Industries has also been moving along smoothly through the pandemic.

“We’re really blessed to have ABL open up shop,” Willard said. “Without them, we’d be without over 80 jobs. That’s huge for us.”

Businesses continue to implement new, creative ways to find solutions to the problem that the country has faced for the past three months. And as spirits continue to rise, Blakeman is confident that the city in heading in the right direction.

“Especially on the entertainment and social side, we need that connection with people,” Blakeman said. “There’s such a hunger for it that those sides of the economy will rebound quick, and they may even be better than before.”

Downtown Salem Partnership President William Dawes said if the pandemic has taught us anything, it’s that everyone’s dependent on a supply chain and there’s an opportunity for new businesses to open to become part of that supply chain locally.

“People want to shop and support local,” he said.

One of the obstacles to reopening businesses had been the availability of sanitizing products. But some local companies have stepped up to provide what’s needed for purchase, especially Lowry Supply in Salem, along with Damon Industries in Alliance and Penn Care in Niles.

He admitted some businesses remain closed, but many have reopened and are doing well. Dawes said people will want to have a nice dinner, they’ll want to visit local stores.

“Our town has not only made it through these changing times, but we have come out of it alive and vibrant,” he said.

Lawson’s Once Loved Furniture moved a block to a more visible location and there’s a new music store on the corner of Lundy and State with an old name, Salem Music Centre. A bike repair shop that opened last year moved too, and has a new name, GC Murphy Co. Bicycles.

Some of the restaurants were able to continue serving customers with take-out orders all along and some of the gift shops are now reopened.

“We are very fortunate to have not seen any businesses closing. There’s a lot of positive things happening,” Dawes said.