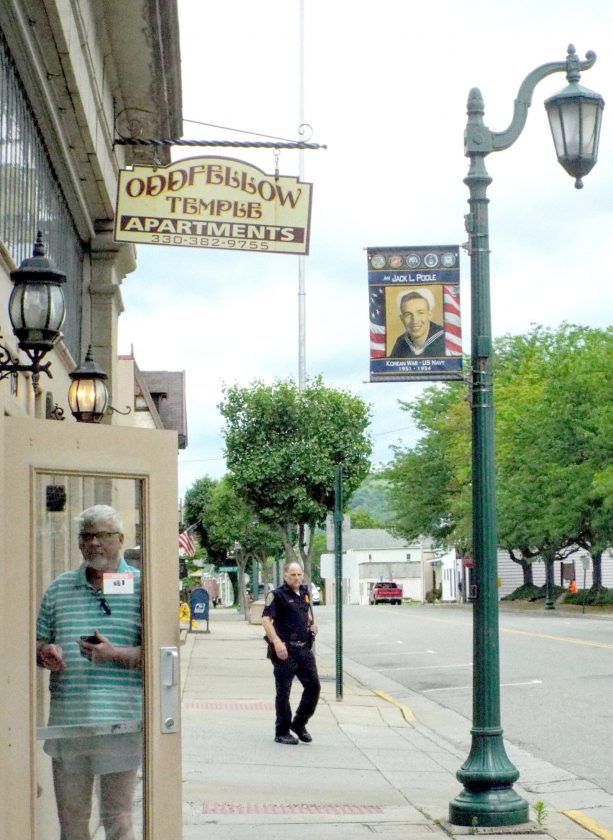 EAST LIVERPOOL — An official investigation is under way in the deaths of two city men who lived in a low income senior housing complex next to city hall.

While police don’t suspect either man fell victim to foul play, it is too early to rule out negligence contributing to the deaths.

Fire crews were sent around noon Thursday to the Oddfellows Temple Apartments, which is located at 120 W. 6th St. directly next to East Liverpool City Hall. Residents there in the main structure complained of the unbearable heat that they had been enduring for days.

Temperatures in excess of 99 degrees Fahrenheit, and the building had no functional windows to ventilate the structure due to its age.

The residents were found deceased in their respective apartments – after having last been seen alive the day before, according to witnesses.

Firefighters quickly determined the building conditions were unliveable due to the heat. They directed building management to put residents up in a local hotel if they were unable to find some place to stay.

One man had been staying in his vehicle due to nonfunctional air conditioning, which had been set for repair.

Some went to stay with relatives. But a large number was taken to stay at a local hotel thanks to local good samaritans.

Tri-State Cab Company owner Amy Hissom recently shared a story of how they learned about the tragedy going on across the street. She explained there is a former company driver who comes across the street to visit the office worker. He had been electing to sleep in his vehicle, which was cooler than his apartment.

City Fire Chief Bill Jones directed all inquiries of the investigation to police Captain Darin Morgan, who could not be reached for comment Saturday.

Local churches, the Way Station, Destiny House and East Liverpool police are providing meals for the tenants, who currently are at a Newell hotel.

This building, which serves as the Oddfellow Temple since 1905 was converted to low income apartments for senior citizens in 2000 and is owned by Columbus-based BCHF Oddfellows LLC. It has been on the National Register of Historic Places in 1985.

The Columbiana County coroner’s office confirmed the two elderly men – whom local police and fire have declined to name – were sent to Cuyahoga County for autopsies and a spokeswoman expects the results back in three to six months.

CANFIELD — Organizers have canceled this year’s Canfield Fair, citing health and safety concerns due to the ...