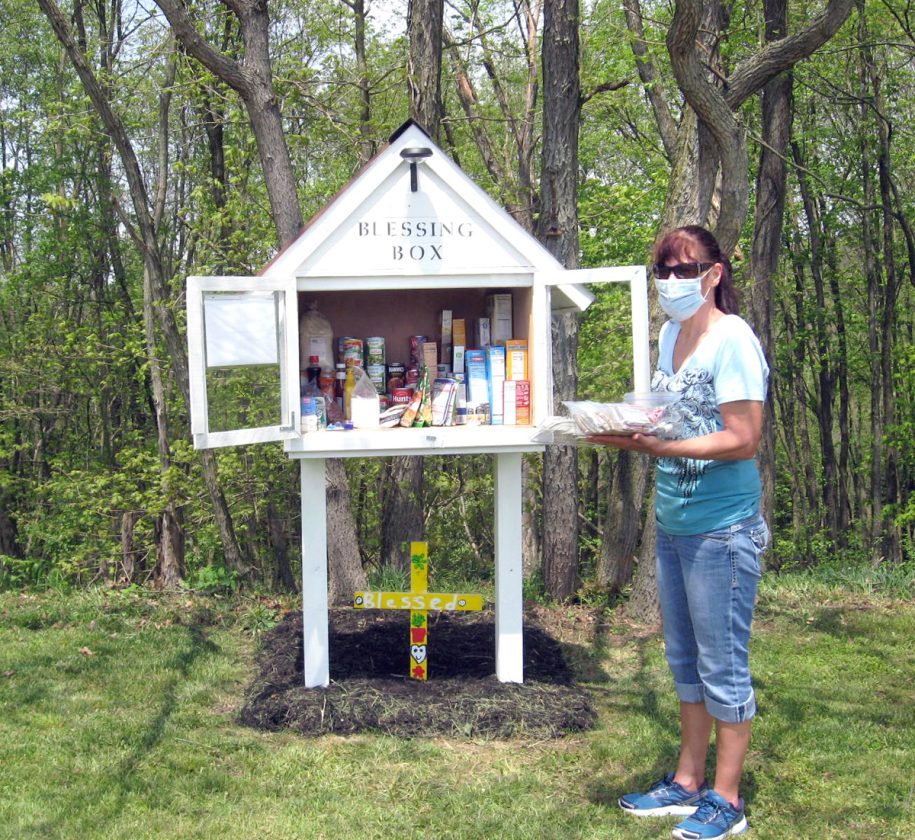 Mel Clark stands next to the new blessing box at the Williamsport Chapel. (Submitted photo)

WILLIAMSPORT — The Friends of Williamsport Chapel, a non-profit organization that owns Williamsport Chapel, 12834 Leslie Road, has a blessing box thanks to Mel Clark. In this day and age, with hunger, unemployment and restlessness, we all need to think of others that need help and food, the group said in a press release. Whether we want to believe it or not there are still people in the community who have very little to eat. After all, there are so many stories about seniors and others who do not have much money left to buy their food after paying for their medications. These things and other personal reasons are what inspired Clark to be very passionate about helping to feed those in need. She wanted to make a blessing box so that anyone who was hungry could go to it and find something to eat to help them out or anyone else who wanted to help could put items in the blessing box, mostly non-perishable foods, hygiene products. Mike and Josh Hoover heard the story of Mel’s passion of wanting a blessing box at Williamsport Chapel and before she even got approval to have one at the chapel, they built and donated it. It is sort of a replica of the chapel. The Friends of Williamsport Chapel approved it at its board meeting recently. Some were for, some were against as they thought, being in a rural location there might not be enough people to benefit by it but after some discussion it was approved. On May 10, Mother’s Day, the blessing box was erected at the far end of the parking lot. It has a solar light on the peak so you can see it in the dark. Someone picked up food by the next day. As some people are very humble and don’t want to ask for help, you can go to the blessing box anytime you are in need. The Friends ask that people do not leave any donations around the church or outside of the blessing box, but for the time being you can stop by on Sundays between l and 2 p.m. someone will be there possibly with other food that won’t fit in the box or might be perishable.