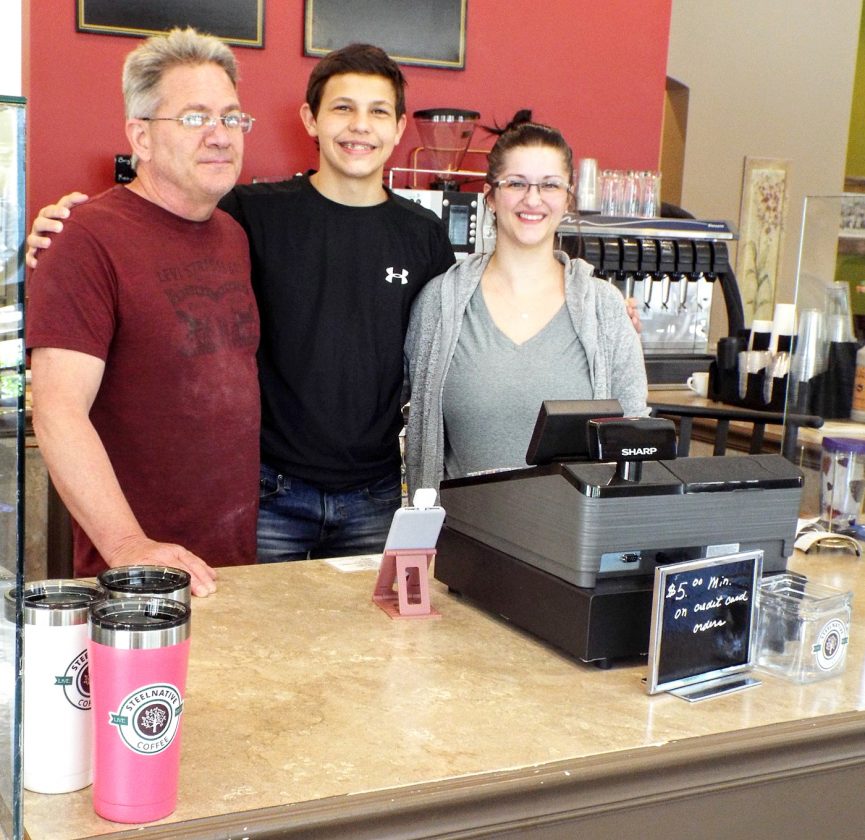 Steve Murphy owns and operates Steelnative Coffee with wife Jodi (not pictured). In addition to roasting his own coffee beans, Murphy, who is pictured here on the left with son Gage and daughter Erica, does all the cooking, ranging from the homemade dough used to prepare the French toast to philly steak sandwiches that will be coming to the lunch menu soon. Steelnative Coffee is located on Fifth Street next to Stevens Jewelers and is open six days a week for breakfast and lunch. (Photo by Stephanie Ujhelyi)

EAST LIVERPOOL — A downtown eatery is best known for its coffee, but area residents also are quickly getting hooked on its food.

With a full offering of beverages like chai latte and hot chocolate, including its many coffee brews, Steve Murphy is the baker and cook extraordinaire. The business just added fountain drinks like iced tea, pink lemonade and fruit punch in time for the summer heat after recently debuting a series of blended coffee drinks.

In addition to his variety of items like fresh baked cookies and cinnamon rolls, which are best warmed a few seconds in the microwave before consumed, Murphy has a full selection of breakfast selections like French toast and Belgian waffles as well as breakfast pizzas.

Everything, including the bread for the French toast, is homemade.

He explained recently that he hopes to add more items to his modest but tasty menu, including a philly cheese steak, chicken sandwich and hummus platter with vegetables now that pandemic restraints have been loosened.

“We don’t want to be just another pizzeria,” he explained.

Coffee is at the focus of Steelnative, which Murphy named after one of his favorite thoroughbred horses.

His wife Jodi explains their coffee’s unique flavor compared to your typical chain drive-thrus. “We source single origin beans ordered from all over the world, places like Kenya and Costa Rica, and roast them in small amounts for freshness.”

She continued, “Steve roasts to the desired level of light, medium or dark. The more you roast, the darker, and smaller the beans get, so those bags look like there is less in them but are more dense.”

This is in comparison to fast food and chain establishments, which typically use coffee blends that are sold cheaper when lumped together, she added.

The shop occupies a historic building that is blocks from the New Castle School of Trades, Market Street Lofts, the Museum of Ceramics and city hall.

Tackling a historic building is rarely a feat for the faint of heart, but the Murphys weren’t discouraged from taking a chance on the former Wetzel Cleaners – especially since Steve is a former assistant building engineer.

Next up for the Murphys is to expand the dessert menu beyond the “melt-in-your mouth” cinnamon rolls and addictive chocolate chip cookies with items like tiramisu.

For more information regarding Steelnative, visit their Facebook page or call 330-383-3472.