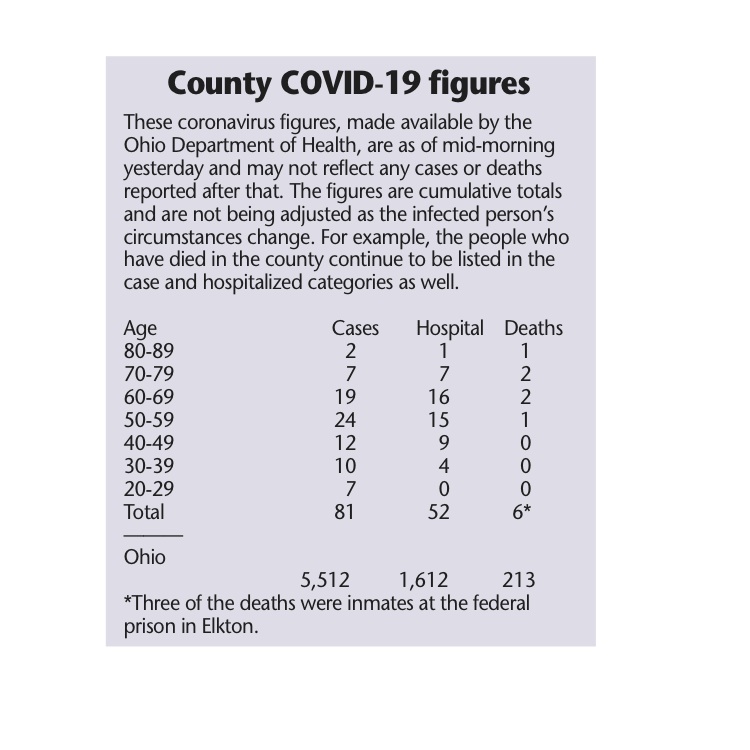 LISBON — For another day this week, the Columbiana County number of COVID-19 cases rose by another 11 confirmed cases to a total of 82. The county Health Department reports 70 percent of the cases in the county are men, which is differs from the statewide figures where 52 percent are women.

The number of deaths in the county remains at six, with half of the deaths attributed to the FCI-Elkton prison.

Today, the federal Bureau of Prisons indicates there are 10 confirmed COVID-19 cases of prisoners and the number of staff has been revised from the 13 reported Wednesday to 9. Additionally, the BOP is reporting that throughout the federal prison system 14 inmates and seven staff members have recovered from their illnesses after previously testing positive for COVID-19.

Joseph Mayle, president of the union representing 280 of the 320 employees at the low-security 2,450-bed security prison in Elkton, reported Thursday the number of inmates with symptoms hospitalized at area medical facilities is 44, an increase of one from the day before. Inside the prison, Mayle said the number of inmates in isolation after exhibiting symptoms is 67, down from 74 on Wednesday. Mayle says 10 staffers have tested positive.

The Ohio Department of Health reports there are 52 Columbiana County residents hospitalized. As the local numbers have continued to increase daily, the Columbiana County Health Department reported Thursday area hospitals are prepared for a possible surge through partnerships throughout the region.

Both of the local hospitals — Salem Regional Medical Center and East Liverpool City Hospital — have long been a part of the North East Central Ohio (NECO) Region 5, a partnership of hospitals in 12 other counties, which total 27 hospitals and 10 specialty step-down hospitals.

According to the health department, the network assures that anyone needing medical services, whether COVID-19 related or not, can be quickly triaged and sent to a health care system with the appropriate resources for all levels of medical care.

“All of the health care centers across the entire NECO region are working together,” said Dr. John P. Crow, associate chief medical officer at Akron Children’s Hospital in a release issued by the health department Thursday. “The larger centers are particularly important as a ‘next’ level for patients that exceed the capabilities of small and medium hospitals.”

Additionally, in a real emergency the region can expand across state lines or expand to include hospitals in the northern part of the state.

At East Liverpool Hospital, they have proactively planned for a surge of COVID-19 patients, according to Dr. Gretchen Nickell, the chief medical officer at the facility. Preparations included securing additional ventilators and other medical supplies anticipated as needing above what they usually keep at the hospital.

“We are confident that we are prepared for a surge within the East Liverpool community and have ample supplies for issues and illnesses related to COVID-19 should our community members need medical treatment,” Nickell said.

Salem Regional Medical Center reports it has increased the number of beds available for ICU patients from 10 to 36, adding 10 from the surgical pre-care unit and another 16 from the endoscopy unit, both sections of the hospital not being used to save resources.

“Our incident command team, physicians and staff have been working tirelessly around-the -clock to prepare for a surge of patients, and we have expanded our ability to care for critically ill patients by reconfiguring our space and creating designated overflow areas,” said Dr. Anita Hackstedde, SRMC president/CEO. “This reconfiguration of our facility flexes our capacity to care for an influx of severely ill patients and we stand ready to serve our community’s needs.”

Additionally, SRMC is set to launch a new tele-ICU service partnering with Advance ICU Care, a nationwide tele-ICU service. The service gives physicians and staff access to critical care specialists throughout the day.

Finally, since opening their COVID-19 Clinic a few weeks ago, SRMC reports they have provided care management for nearly 300 patients.

The health department and local hospitals believe that by pulling together, they will be ready and not become overwhelmed by a surge of local cases. Statewide hospitalizations are listed at 1,612 with 497 listed as requiring ICU treatment. During the daily press briefing inside the Ohio Statehouse while protestors rallied outside, Dr. Amy Acton said there are now 5,512 confirmed cases in Ohio and 213 deaths. 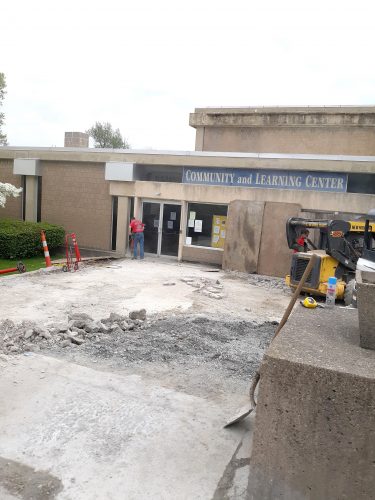