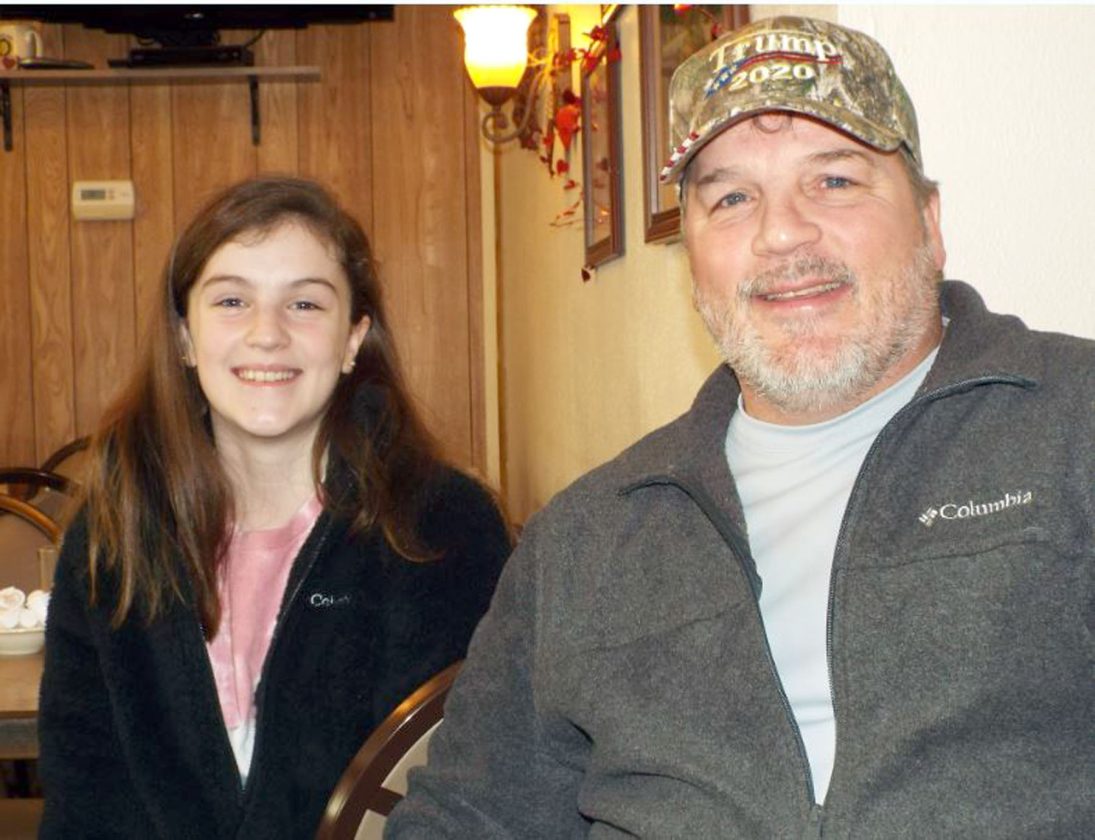 Jocelyn and John Pomeroy attend an open house of the Lake To River Chapter of the American Red Cross in East Liverpool Wednesday morning to sign up as volunteers years after surviving their own house fire. Jocelyn, only age 12, will have to return after her 13th birthday in June to sign up the agency’s Summer Youth Corps. (Photo by Stephanie Ujhelyi)

EAST LIVERPOOL — Sometimes surviving a personal disaster can create a volunteer. That was the case for John Pomeroy, whose family suffered a devastating loss of their Clearview Street home in December 2017.

Karen Conklin, executive director of the Lake to River chapter of the American Red Cross, explained that often is the case in how the next wave of heroes who want to make a difference in their communities.

Neither John or his wife Sherry and daughter Jocelyn were home when the blaze occurred. More than two years later, he still wonders about the fire’s cause, speculating it could have been the family’s woodburner but acknowledging it just as easily could have been caused by something else.

Authorities never made a determination, and that question still haunts him.

During the agency’s open house Wednesday at Hoge’s, Pomeroy could be seen filling out paperwork at a laptop in the corner to join the American Red Cross’ disaster team as his daughter Jocelyn sat across the room. She also wanted to join, but Jocelyn is a few months shy of her 13th birthday so it would not be today.

She had hoped to sign up for the Summer Youth Corps but the minimum age is 13, so she will be back on June 2.

There is an urgent need for disaster action team volunteers to help local victims of home fires and flooding. Disaster volunteers receive free training and are expected to commit to at least four hours each month. “While police and fire personnel are the first responders, the American Red Cross are the second responders,” explained Conklin. “Our services are always free and we receive no government money.”

Every day, nearly 30,000 people receive assistance from the American Red Cross, which breaks down to 20 people a minute. That includes collecting blood donations, assisting the military and providing life saving training.

“If you are that person that watches news stories about a home fire and wonders what the Red Cross role is, when a local family loses everything in a devastating home fire, do you wish you could help? Your local Red Cross is the first step to making a difference,” she continued. “We are hoping that retired people or those who have the time to give will volunteer,” adding that an hour of volunteer time is the equivalent of a $25 value.

There are three home fires every 24 hours in northeast Ohio, Conklin said.

From April 18 to May 3, American Red Cross volunteers, local fire departments and partners will install 100,000 free smoke alarms nationwide. Working smoke alarms can cut the risk of death from home fire in half. Please volunteer with part of the agency’s Sound The Alarm, Save A Life effort on May 2 in Lisbon to help install smoke alarms. More information is available at 330-392-2551.

The American Red Cross is heavily reliant on their volunteers, whether it is for canteen service at local fires or providing assistance at sites of devastation like tornadoes or natural disasters. After all, 90 percent of their workforce consists of volunteers.

When the Pomeroy house was struck by tragedy several years ago on Dec. 15 around midnight, he was a familiar face to many of the American Red Cross personnel. Though not a volunteer, he was a referee in wrestling circles, and they admit that they took things to another level for his family.

“This is the first time, we replaced keys to a van,” one staffer could be heard saying during Wednesday’s event, adding that now it is their specialty.

Wes Boyd, an amateur radio operator from Girard, also was in attendance Wednesday to upgrade his training. He first became involved with the American Red Cross through his radio work, but now he finds himself assisting with blood drive and other public service events. He has been volunteering with the agency since 1985, when he showed up to assist with radio communications after the May 31, 1985 tornadoes.

Some parting words of wisdom from Pomeroy, the latest American Red Cross volunteer and someone who has been on the receiving end of the assistance?

There are certain things that you can fully prepare for. Checking your insurance and inventorying your home are a few. “Prepare for the unexpected,” Pomeroy concluded. “My family is grateful for the American Red Cross and the tough work that they do.”

SOI Fish Fry WELLSVILLE — The Wellsville Sons of Italy will have our fish fry 4-7 p.m. today, CARRY OUT ...

LISBON — An FCI-Elkton prison inmate may have become the third death in Columbiana County due to the ...

April 21 — The Columbiana County Hope Festival Relay for Life meeting has been canceled.

WASHINGTON (AP) — The Trump administration is formalizing new guidance to recommend that many, if not almost all, ...