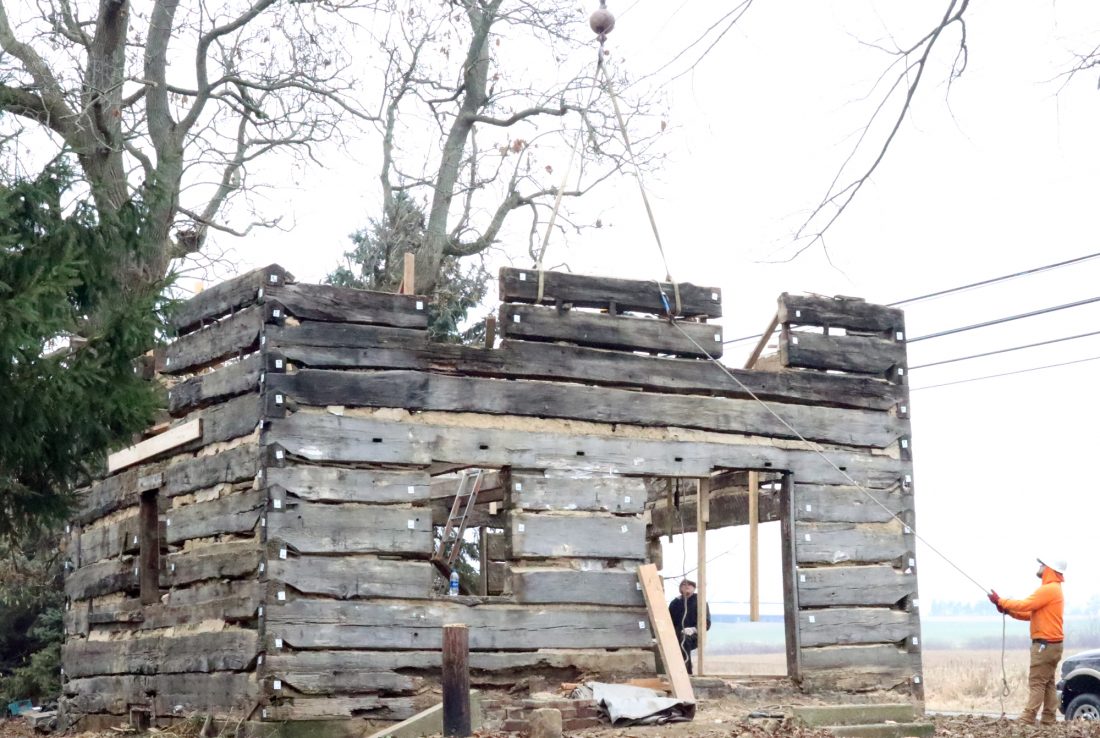 A log cabin located near Columbiana is taken down piece by piece. It will be rebuilt at Beaver Creek State Park. More pictures appear on page C1. (Photo by Deanne Johnson)

LISBON — The tools used in home building may have improved through the years, but some of the homes built with those old hand tools have withstood the test of time.

One of those was located along state Route 14 just west of Columbiana and until a few short years ago was still the home of Cindy DePilli. When the family built a new home behind it on the Esterly family farm, the old house was expendable and seemed bound to be torn down.

But when the siding was removed it revealed something more lay underneath, an old cabin.

While records show the house may be from the 1860s, by looking at the joints, the window jam pegs and other clues from the way it was put together, Dan Lyon, the president of the Friends of Beaver Creek, said it could be as early as the 1820s or 1830s.

“The joints on the corner are nearly perfect,” Lyon said, adding those joints were all done using a chisel and a hammer. “It’s amazing. We’re so lucky to get it.”

After a lot of paperwork and logistics, the Friends of Beaver Creek were recently able to have the home taken apart in Columbiana as they prepared to move it to its new location in the Pioneer Village at Beaver Creek. It will be placed on a new foundation poured near the lake, the mill and the general store.

The latest project of the Friends of Beaver Creek, this log home will not be in the same place as another log house — which burned six years ago — due to concerns about placing the foundation on that filled-in site.

Lyon said the group is working with a man who has a business refurbishing log homes in Akron, Town and Country Log Homes, although this will be his first time rebuilding a home. The owner was on hand in Columbiana with two of his employees as they began the process of taking the house apart one beam at a time. They were aided by a huge crane and an operator from Weaver’s Crane, which was lifting each beam from the top of the house and placing it gently on a flatbed truck.

Also helping that first cold week in November were volunteers from Friends of the Park, including Lyons and Don Martin, who is on the Board of Directors. Angela Pollock, who has a degree in historic preservation from Youngstown State University, also watched the process with interest, noting there is not very many old properties being preserved in this area and she was making a video to show the work being done.

In order to move the house from the northern edge of Columbiana County into the state park, each wooden beam was labeled and each joint marked with the goal of taking it apart board by board and then putting the pieces back together, making sure the joints line up precisely. Even the wooden pegs, which held things in place, are being saved whenever possible.

When this house was built, any square nails used would have been made by a blacksmith. Wedges held in the window corners and the joints at the corners of the building were shaped with hand tools to create a solid structure.

Lyon said they hope to be able to keep the layout of the house nearly the same as it was before. Many of the parts are still in great condition, with the exception of some of the beams nearest to the ground, which show signs of rot. Those are being replaced with newer beams being made to look like the originals.

Lyon said DePillo saved a lot of the old window frames and the window panes.

Once the cabin is in place in the park, it will be like those from the time period when the house was built.

Although much of the work for this project and others at Beaver Creek Park is done with the help of volunteers, Lyon points out more than $100,000 has been put into the park by the Friends of the Park group. When this project is completed, the amount may be closer to $200,000.

He hopes they have the project under roof by Dec. 20. When it is completed, inside visitors of the park will get to see a display about the construction of the home, which was built by hand like many of the old houses built in the area when the county was young.

Lyon said the Friends of the Park are already looking at their next project, recreating gates for the lock sitting in the park. That project is estimated to cost between $28,000 and $42,000.

LISBON — Village council cut ties with its tax administrator on Monday after she failed to show up for work and ...

LISBON — The village has been given emergency funding to fix the major sewer line break at the intersection of ...

CHESTER, W.Va. —The water board discussed fire hydrants at Wednesday’s meeting. A resident attended to ask ...