SALINEVILLE — Village council unveiled an ordinance on this week to regulate the use of recreation camps and recreational vehicles within the village.

The ordinance bans having a recreation camp, which it defines as a tract of land with two or more portable camping units placed on it or property subdivided for lease to allow two or more camping units. However, it does allow for someone to have an area solely used for storage or displaying recreation vehicles for sale.

Portable camping units are defined in the ordinance as recreational vehicles, as well as tents, portable sleeping equipment and similar camping equipment used for travel.

Additionally, any recreational vehicles must be operable and have current registration. The regulations state no one can live in them permanently and limits the amount of time someone may stay in one temporarily. The person staying in the recreational vehicle must be a non-paying guest of a village resident, who is required to obtain a $10 permit in advance of their guest’s stay and prominently display the permit.

The guest may only stay there for a maximum of 72 hours at any one time and for a total not to exceed six days in a calendar year. The recreational vehicle must be parked at the residence of the permit holder.

Finally, gray water, which is the contents of the sewage holding tanks, must not be disposed of within the village. The recreational vehicle cannot be connected to any utilities except for electric.

The legislation was given one reading this week but is expected to receive all three readings. The next meeting of council is set for 6 p.m., Monday Sept. 16.

In other matters before council:

— A member of the Salineville BPA, Drexall Hawken, spoke to council stating there is more than $2,000 in back due sewer bills owed. One account currently owes nearly $450.

In many cases, Hawken said the property is a rental and the renters have no ties to the community.

Council members stated the BPA can go after the property owner for the money and wait until the end of the year to have the past debt placed on the property taxes.

Another problem that came up was when the resident’s water is turned off and they pay their bill to Buckeye Water District, then the BWD may turn the water back on despite the person still having past due sewer bills. The sewer clerk, Kayla Taggart, said she faxes or e-mails a list to BWD regularly about who owes sewer money, but she does not receive a list from BWD regarding who owes them for water.

Mayor Linda Adams pointed out at one point the village had $50,000 in customer arrearages.

— Village council continues to look at options to purchase a newer pickup truck. They will be selling the current truck with sealed bids accepted until noon on Sept. 12. Council readily admits the body and the frame of the truck is shot, but it could be used by someone for parts.

— Council has received the Dec. 1 resignation of Gene Polen, who has served on the cemetery board for 17 years. In his letter, Polen said he is proud of all they have accomplished during his years on the board. Anyone interested in serving on the board should submit a letter of interest to Adams by Nov. 1. 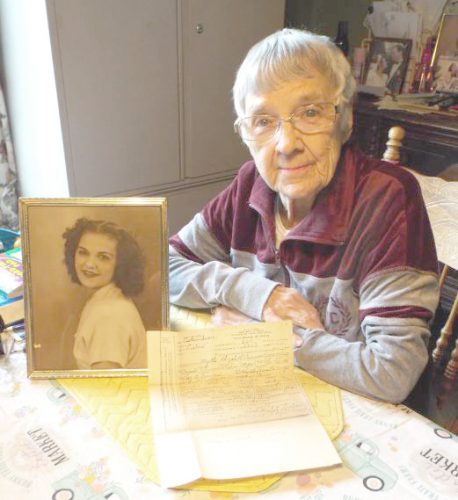