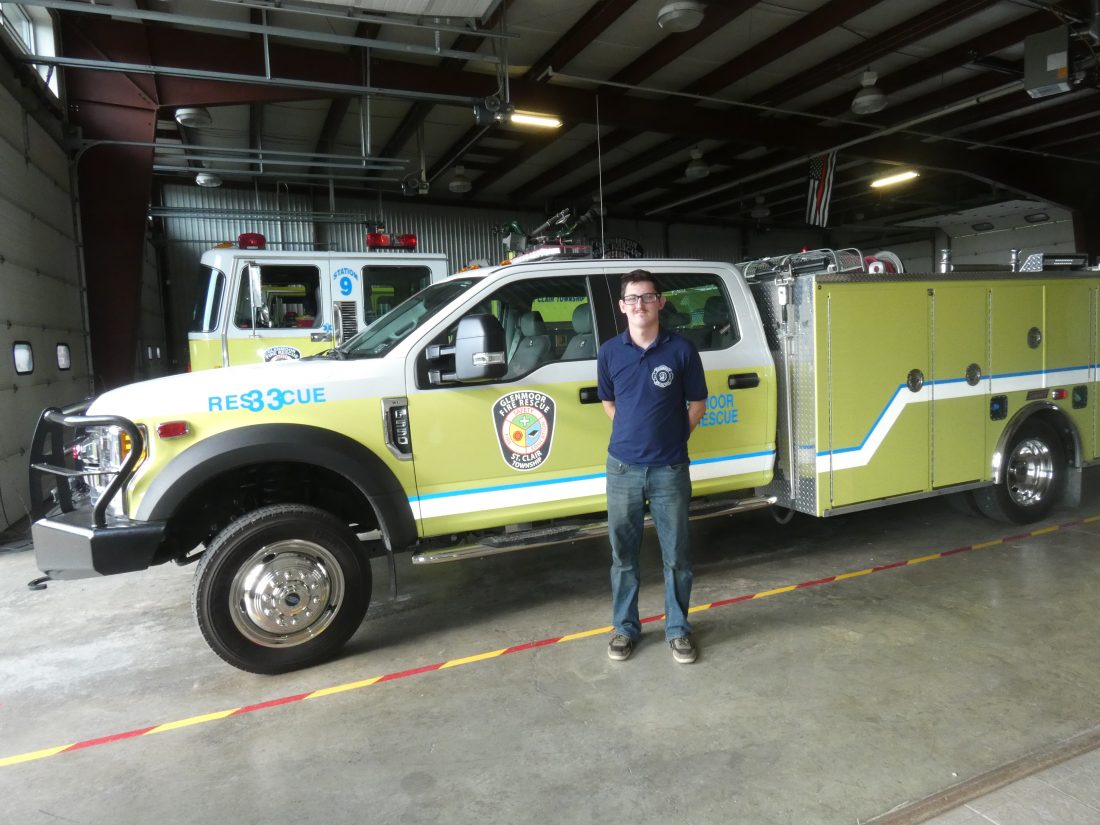 EAST LIVERPOOL — Most fire departments find themselves in midst of a crisis.

It is a trend that Derrick Smith, a first lieutenant with Glenmoor fire department, is more than just a little familiar with.

A 2014 Beaver Local High School graduate who had earned his firefighting credentials at the Columbiana County Career and Technical Center when it was still offered out there, Smith was introduced to the department in 2001, when his father (and now assistant chief) Matthew joined the department after 9/11.

Deciding it was a good opportunity to earn some community service hours, Derrick eventually become a cadet after being encouraged to apply. “The cadet program is used to get younger people interested in firefighting and teach them the basics on how they can assist fire personnel at a call,” he explained, adding those cadets eventually become recruits and potentially fully recognized firefighters on the Glenmoor Fire Department.

After recruits clear their probationary period, which generally lasts from six months, the Glenmoor fire department pays for their initial training.

It is quite a perk brought on by the need to introduce young people to the art of firefighting, which is often dominated by those of retirement age and the everyday work commitment most find these days. “It is troublesome that is so hard to find young people,” Smith said, adding that retention can be problematic.

Part-time and volunteer fire departments, for example, are often reliant on their day jobs (Smith’s is as a general contractor for the Shell plant in Newell, W.Va.) to support his family. The lack of medical benefits, pension as well as the risks associated with firefighting, many which truly became well publicized after 9/11 have made this is a challenge.

While not many people think about it, firefighters are exposed to various unknown carcinogens and have unpredictable sleep opportunities depending on what may occur at every given time of the night as well as limited availability of staff.

“Firefighters are truly unpaid and underappreciated most of the time,” Smith admits except on the rare occasion. “We are humbled when people stop by after a fire and thank us, as it shows they care.”

The Glenmoor Fire Department is one of two volunteer departments that service St. Clair Township.

Passed levies generate approximately $260,000 annually for fire protection, and that money is split evenly between Glenmoor and Calcutta fire departments on a quarterly basis through fire contracts.

Chartered in 1949, the Glenmoor Fire Department is served by a variety of different equipment, including two squad trucks, two engines and a tanker – mostly aged but well cared for.

For example, he explained as he pointed to a vehicle parked in one of the Annesley Road station’s bays, “This tanker used to be a milk truck.”

As Smith explains, the department does focus on making sure the gear and tools assigned to these trucks are the most advanced to not only serve residents but protect the firefighters from danger.

In addition to the levy money, the department does periodic fundraisers, like sell food at the annual St. Clair Township Memorial Day festivities.

Smith is most proud that Glenmoor Fire Department has more than 25 active members – not counting two cadets and five support members, who provide assistance at scenes with items like food and water. “This is a solid group (of volunteers) from all walks of life – most of which live within two minutes of the station,” he adds.

Anyone interested in becoming a volunteer firefighter with Glenmoor or inquiring about the department’s fire safety program, which includes a free home assessment, should contact 330-385-5627.