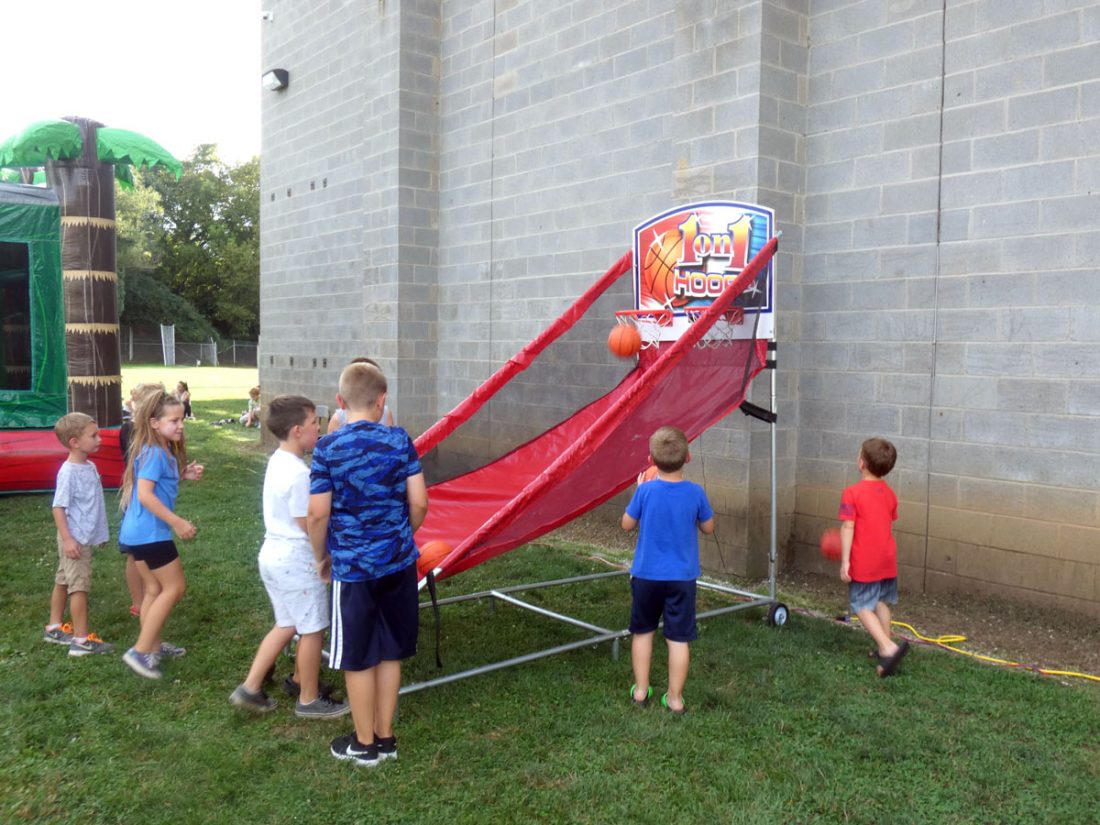 This hoops game was a popular stop for youth during Wednesday afternoon’s Back-to-School Bash for East Liverpool School District youth. The bash included many activities throughout the Westgate Middle School and Patterson Field area, from a bounce house and an inflatable obstacle course that had lines most of the time during the two-hour event. (Photo by Stephanie Ujhelyi)

EAST LIVERPOOL –With summer almost over and anxious to learn their classroom assignments, hundreds of children converged on Westgate Middle School about an hour early Wednesday.

According to LaCroft Elementary School Principal Betty Ann Phillips, when she showed up around 5:20 p.m., almost 40 minutes before the event was to start, parking already was at a premium as families were lined up.

Music courtesy of Ryan Stovall, East Liverpool mayor who doing double duty as the event’s deejay, filled the air as children stepped up to learn their class schedules if they were high school students or classroom students if they were from the elementary and middle school grades.

Volunteers not only dispensed that very valuable information, but parents and guardians signing in at a station were eligible to qualify for door prizes of sorts, consisting of basket drawings for everything ranging from Crayola art supplies and gift cards donated by local businesses, such as D.W. Dickey for the event.

In addition to the schools, which all had their own information tables, stations peppered Patterson Field, including facepainting by the East Liverpool High School cheerleaders, inflatable obstacle course, bounce house and carnival-style games, where youth could take their change, trying to toss the crown into a giant Princess board or launch a stuffed Super Mario character successfully through a hole.

U.S. Census officials also was set up at the event to not only share information about the upcoming count but potentially recruit possible employees from the local area to assist.

In the building, more fun was to be had, explained East Liverpool schools Superintendent Jonathan Ludwig.

For example, not only could students register for their bus pass registration, they could grab a free hot dog or piece of pizza as well as select light refreshments or get their hair cut. The East Liverpool Police Department was on hand to distribute free “See Something, Say Something” bookbags, while others took their chances to win a free bicycle. In all, he added that the staff went through 700 slices of pizza for the two-hour event.

Many students and staff volunteered for the event, particularly from the high school, Ludwig noted. “There was a lot of collaboration to make this a very nice event.

Back-to-school activities culminate with a splash party from noon to 6 p.m. Saturday at the Thompson Park Pool with free food and admission and each school will host its individual student open house next week.

Students will resume classes on August 26 for the new school year in East Liverpool.

“Overall, (the Back-to-School Bash)went very well, and staff even commented on how it appeared that we had more attendance than in the past. We had a line at the gate,” the superintendent concluded “This event is good especially for students, transitioning from one school to another,” explaining it gives them the opportunity to meet the new staffers.