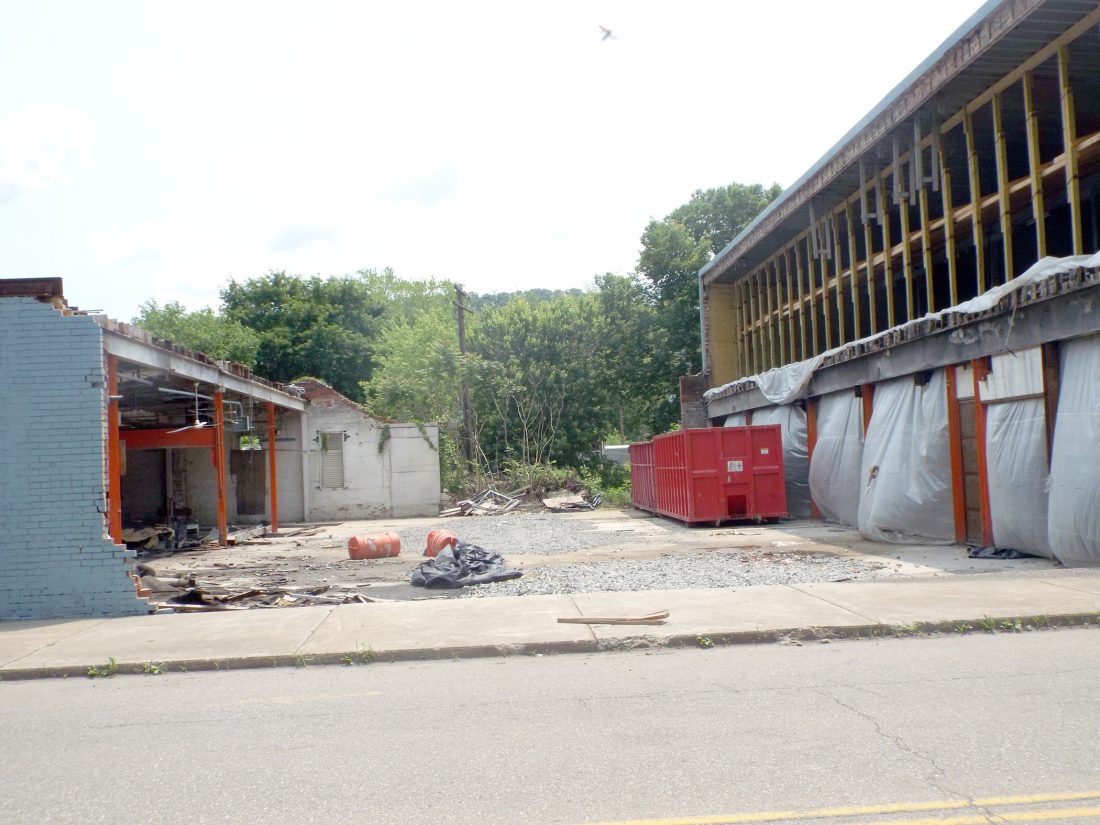 Plans call for the center of the former Ferro building to include a greenhouse for the cultivation operation. (Photo by Stephanie Ujhelyi)

EAST LIVERPOOL — Construction is underway at an East End building which will be the home of FarmaceuticalRX’s processing, research and distribution operations in future months.

“We will be hiring 20 to 25 people to start in July at our processing center and initially 20 to 25 for our cultivation operations,” she explained. That number would eventually exceed 75 total after Thanksgiving, Myers noted.

In mid-May, FarmaceuticalRX, who operates the FRX Health dispensary on Dresden Avenue, was notified it received both its Level 1 cultivation and processing licenses in the State of Ohio, which positions the company to be a vertically integrated operator.

She explained, “The continued expansion of our operating base is a key component to the development of our therapeutics platform. This is another important step on our path to truly transform the way medical marijuana is developed and delivered in the area of cannabinoid therapeutics.”

“We intend to make Ohio a critical part of our continued innovation and Ohio patients the beneficiaries of our mission,” Myers added.

FarmaceuticalRX currently touts itself as Ohio’s only licensed cultivator growing in Living Soil, a pure and natural style of cultivation.

In addition to producing high-quality cannabis flowers, FarmaceuticalRX will be producing a variety of pharmaceutical-grade cannabis extracts through its processing business. With more than 300 medical cannabis strains, sourced from all over the world growing in the East Liverpool cultivation facility, the company is positioned to develop a long list of medical marijuana products.

“Our extraction team is comprised of experienced chemists and cannabis professionals. This balances analytical precision with a holistic approach, which we feel is truly part of who we are as a company,” says Maffey. “We’ll come out of the gate with some of the highest quality medical marijuana products in the world and keep innovating as we listen to the needs of our patients,” continued Maffey.

Currently 29,000 square feet of the former Ferro building, which is 110,000 square feet, is being retrofitted to house the processing side of the operations, while cultivation will occur in the remainder, according to Myers.

Once the plants reach 18′ high, she adds that the products with processed in sold in their East Liverpool and Farrell, Pa., where they also are licensed, dispensaries.

The company is also currently partnering in research and development with Marshall University, West Virginia University, Case Western Reserve University and Penn State University along with possible agreements with an unnamed Ivy League school. Initial efforts will include examination into the opiate addiction by the bio-tech company and WVU, Myers revealed.

Maffey includes customers at their dispensaries to participate in the research process for the maximum benefit.

“Now that we are vertically integrated, our cultivation and extraction teams will be able to take patient feedback as we decide which cannabis varieties to plant–or which products patients would like to see first,” she said.

Pharmacist Joe Jeffries will work closely with the cultivation and extraction teams to help patients access the highest quality medicine for their needs. The FRX Health Dispensary is one of the highest rated dispensaries in Ohio.

East Liverpool Mayor Ryan Stovall describes word of the licensing moving forward as very exciting. “My administration is looking forward to working with FarmaceuticalRX as they expand and grow to serve not only the local community but the entire State of Ohio.”

Stovall said that the company has paid around a half million dollars in fees alone when applying for their cultivation and processing licenses.

Jobs generated by FarmaceuticalRX should generate living wage jobs that pay a minimum of $15 per hour and benefits, according to Myers. For more information on upcoming job opportunities, one can find information on the company’s website, www.farmaceuticalrx.com.