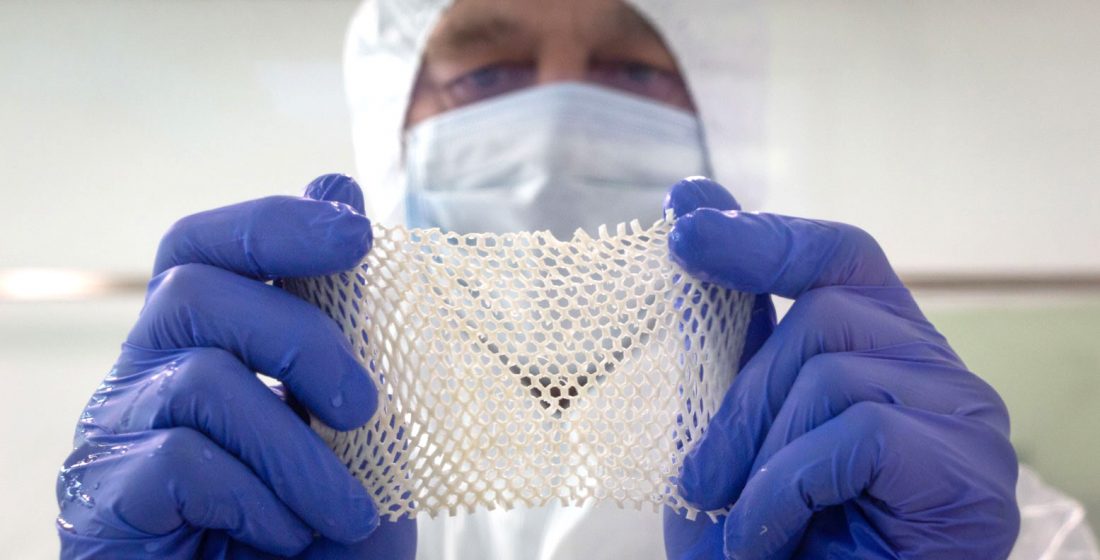 Brian Lynn Thomas, director of manufacturing and compliance for Kerecis, holds up a square of the company’s Omega3 wound skin graft, which is made from the skin of North Atlantic cod caught off the coast of Iceland. The Kerecis Omega 3 graft helps chronic wounds like ulcers and burns heal faster due to the presence of polyunsaturated fatty acids, which eventually integrates into one’s own skin as the wound heals. It also helps to protect the wound from outside harmful bacteria and irritation. (Submitted photo)

EAST LIVERPOOL — For two decades, Dianne Simmons had sought medical treatment for the slow-healing wounds on her legs.

She had become accustomed to the probability that some of those ulcers might even be more stubborn than she is, but then the Cadiz woman saw a television segment on a new protocol involving fish skin being utilized at East Liverpool City Hospital.

After calling the hospital a few days after seeing the segment, Simmons had her appointment and once again had hope again.

According to Kerecis, which is manufactured out of Iceland from cod fish skins, accelerates the wound healing because of the structure of the fish skin and the presence of health Omega3 fatty acids. As a brochure explains, “Fish skin has the same structure as human skin. Kerecis fish skin is processed gently, retaining all the building blocks for wound healing and maintaining its similarity to human skin.”

Dr. Gregg Bogan, who is a general surgeon in the Wound Care unit, explains a little about his work with Kerecis, which works with the majority of people needing new skin and discontinues the need for taking a graft from elsewhere on the body.

When one thinks about it, Kerecis isn’t as much as a stretch as one would think. Fish skin is a close match DNA wise to human skin.

“I don’t know why science tried this, but it works,” Bogan, who has personally done nearly 40 procedures himself, attests. Everyone is not necessarily a candidate for it. For example, slow healers due to diabetes or smoking don’t necessarily see the desired results.

But it definitely is a preferrable alternative to the typical treatment now. “I’m opposed to skin grafts, which often create another open wound on the body,” Bogan said.

According to Rick Perez, director of business development and marketing for East Liverpool City Hospital, the hospital currently has a two-year exclusivity contract with Kerecis within a 48-mile radius and will be doing an official launch early in April for the program. He recently returned from Iceland where he got to see the manufacturing up close and personal.

Similar treatments were used to help heal the paws of bears who were burnt in the 2018 California wildfires. Except, doctors used tilapia fish to heal those wounds, a fish that should not be used on humans, according to Perez.

Simmons, who was driven by a friend, visited the hospital’s Wound Care Center Friday for her followup appointment, one week after a nurse practitioner had applied a Kerecis Omega3 dressing to one of her two leg wounds to evaluate her process.

Typically, a wound that does not respond to normal medical care within 30 days is considered a problem or chronic wound.

Carla Ours, a clinic registered nurse, measured the wound and found a 50 percent improvement since the Kerecis application.

“I’m so impressed with this,” Simmons tells Ours, who was preparing the patient for Brittani Cave, a nurse practitioner, to apply the Kerecis to Simmons’ other wound on the other leg.

Cave explains, “(The wound) is moving in the right direction” before starting the application process on the other leg. After applying gauze saturated with saline to the wound in question, the Keresis (which resembles a thicker and more porous cross stitch gauze square) is applied before another larger gauze square is affixed on top of it.

The wound that had received a Kerecis treatment last week just receives a collagen dressing as the residual from the Kerecis is still god for another 10 days, Cave said.

“This has meant a lot to me as I’ve had ulcers for 20 years,” Simmons recounts. “I’m so excited. I cannot wait to see where I go from my first appointment. I had attended nine or 10 clinics in the Tri-State area seeking wound relief. This gives me a second chance at life. I am hope I can wear socks and lead a normal life again.”

Simmons can expect to go through the Kerecis process for six to eight weeks.

Perez said he hopes to see the advancement to eventually be made available at all Prime Healthcare’s 45 hospitals across the United States.